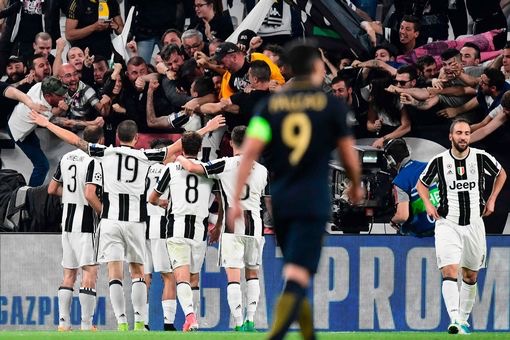 Juventus sealed their place in the 2017 Champions League final in Cardiff with a convincing win over Monaco. In addition to their 2-0 win in the first leg, they managed to win again on the night in Turin.

This game began with a confident start from Monaco. The team from the principality started with a lot of impetus and did threaten Juventus.

The first chance of the game fell to teenage sensation Kylian Mbappe who got on the end of a brilliant through-ball, but he and hit the post. The chance was eventually given as offside, but it was a statement of intent from Monaco.

The game changed from there as the roar of the home crowd motivated Juventus further forward. They began to create a lot of chances, mostly coming from clever through-balls which cut through the Monaco defence.

The chances started coming thick and fast and Subasic did well to keep the score at 0-0.

The deadlock was broken in the 33rd minute as Mandzukic put the ball past his international teammate. Dani Alves played in a beautiful cross and Mandzukic needed two bites of the cherry to score, but did convert eventually.

The Juventus dominance continued but their second goal came in impressive individual circumstances.

Juventus earned a corner following another fabulous Subasic save. The corner was swung in and punched away by the Monaco ‘keeper. Dani Alves ran onto the ball and hit a flush volley into the bottom right corner of the net.

The technique on the strike was akin to that of Paul Scholes hitting a volley, impressive for a right-back. Juventus went in at half time 2-0 to the good.

The second half started again with a valiant effort from Monaco. They put pressure again on the Juventus defence but the Italians looked too well drilled.

The game began to show signs of frustration as a few kicks and stamps creeped in. The referee managed to keep a decent level of control and Monaco finally started to find some cracks in the impenetrable Italian defence.

Finally Monaco scored against Juventus and who else than young Kylian Mbappe. Following a hard, low cross, the striker tapped the ball home from close range. In reflection on the replays, the youngster displayed excellent movement to get to the ball, furthering his pedigree as a world class talent.

However Monaco’s pressure on Juventus following the goal was mostly ineffective and Juve hung on for a 2-1 win on the night and a 4-1 aggregate win.

It was another stellar performance from the entire Juventus team. Buffon made good saves, Alves was a menace for Monaco’s defence and Mandzukic once again worked incredibly hard.

For Monaco they were simply outclassed over two legs by an experienced side. This Monaco team does have a very bright future, if they all stay there. But it will be Juventus playing one of the Madrid clubs in Cardiff; can they go all the way?

Do Juventus have what it take to win the Champions League this year? Leave us a comment below