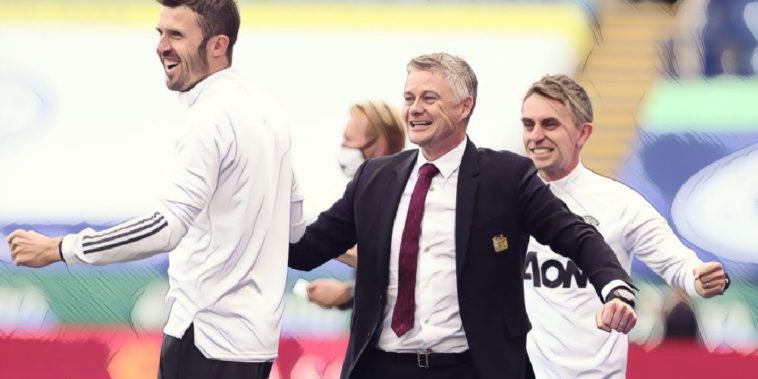 Ole Gunnar Solskajer defended his style of management after his side overcame the odds to clinch a place in next season’s Champions League.

Manchester United endured a woeful start to the season, sitting 13th after nine games and generally looking miles of the pace being set by those at the top.

While they picked up notable wins against the likes of Chelsea and Man City, and were the first team to take points off of Liverpool, Solskjaer’s side regularly struggled to break down the division’s more defensive sides.

United’s form saw plenty of suggestions that Solskjaer was close to being sacked, though the mid-season arrival of Bruno Fernandes has sparked a hugely impressive revival, the Red Devils finishing the season with an impressive 13 game unbeaten streak in the league.

Sunday’s win over Leicester City secured a third place finish for United, overhauling a once 14 point deficit to Brendan Rodgers side, and the Norwegian admitted that the criticism of his management and his side’s style of play only served as motivation.

“I don’t think many were predicting it, the predictions were for us to finish sixth or seventh,” he told Sky Sports.

“I’ve always been made that way. If I’m getting criticised that makes me stronger in what I’m doing. Please don’t praise me too much as I’ll get complacent. That’s the way I’m made.

“It’s a massive achievement by the staff and players. They are incredible. I had a chat with all of them today saying no matter what happened today we’d had a fantastic season. We’re building a culture. I’m very pleased and proud of their efforts. To win this game was massive mentally as we’ve lost two semi-finals.”

United reached the semi-finals of both domestic cup competitions, and still remain in the hunt for European silverware, their Europa League campaign resuming next month where they are 5-0 up in their last 16 tie against LASK.