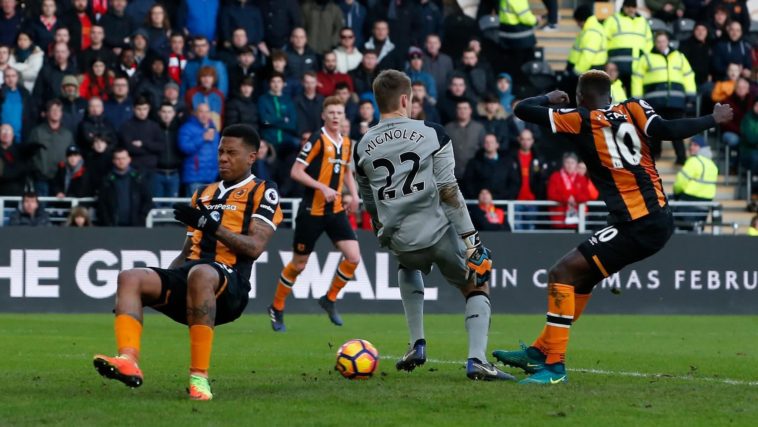 Liverpool dropped out of the top four after this weekend`s games after a woeful display where they lost 2-0 away to relegation placed Hull City. Here five things we have learnt from the game.

Again there were failings in the Liverpool goalkeeping department. Mignolet should have done better with Hull`s opener in the first half when he allowed Alfred N`Diaye to score on his debut for Hull.

The second goal for Hull late on could not be attributed a goalkeeping error though as Niasse raced through and slotted under the advancing Mignolet.

Liverpool have chopped and changed their keepers recently between Mignolet and Karius and neither look like they are good enough. Both lacking confidence when called upon and not rising to the challenge of claiming this spot as their own. Being Liverpool`s goalkeeper at the moment is particularly hard as being last man behind a consistently poor defence, so not an easy job.

2. The defence isn’t much better

Liverpool`s defensive failings have been all too common this season and they have let in lots of goals from set pieces. The marking has been none existent and they appear to be sticking to this zonal marking tactic which clearly doesn’t work.

Saying that, Liverpool don`t have the correct personnel to cover all positions. An injury to Lovren forced Klopp into playing Lucas at centre back.

Lucas isn`t a centre back and whilst he has been a great servant to Liverpool and he`s happy to play anywhere to help the team, it`s not his favoured position. The same can be said for Milner who has played well at left back in many games, but it is not his natural position. Add into it the issues with clearance from FIFA in playing Matip, so we have had a few problems in this area all season and it is one Liverpool need to resolve as soon as possible as again against Hull it was shambolic at times.

There have been lots of changes in recent games to accommodate the high number of games. Liverpool played 10 games in January, winning just one, but the pairing of Henderson and Can for this game raised a few questions.

The midfield against Hull never got going and was laboured throughout the game and couldn’t find a way through or change the style of play.

And whist Liverpool had the majority of the possession, 72% compared to Hull`s 28%, it was getting them nowhere, and Liverpool have no plan B.

After being knocked out of the two cup competitions in recent weeks and then seemingly picking themselves up when they drew with Chelsea last week, there was a lot of optimism that they could put January behind them.

The opportunity to potentially play a full strength side week in week out and potentially get Liverpool back on track.

Chelsea were 10 points ahead prior to this game so the title was all but over anyway, but it was a great opportunity to consolidate second place ahead of Arsenal, Tottenham and Manchester City, which would have been a great achievement.

However, after this loss against Hull and the other results of the weekend, Liverpool slumped down into 5th position. Manchester United are now just 1 point behind with our noisy neighbours Everton a further 6 points behind, bearing in mind at the end of 2016 Everton were 20 points behind Liverpool, and both Man Utd and Everton are playing well at the moment.

5. Hull have found their Silva lining

It isn’t long ago that Hull were dead a buried under Mike Phelan. However after his sacking and the appointment of Marco Silva, they can genuinely look up rather than down. They beat a strong Manchester United side in the EFL Cup semi-final second leg, and followed it up with a 0-0 draw at Old Trafford in the League.

The new Manager Marco Silva seems to have got things moving in the right direction at Hull and they have now taken seven points from the last twelve to move off the bottom of the table, and now sit just one point behind Swansea, Leicester and Middlesbrough. Hull face Arsenal away next and who knows what will happen if they manage to get a point or even all three!

Where will Liverpool finish? Can they make the top 4? Will Hull survive the drop? Leave us a comment