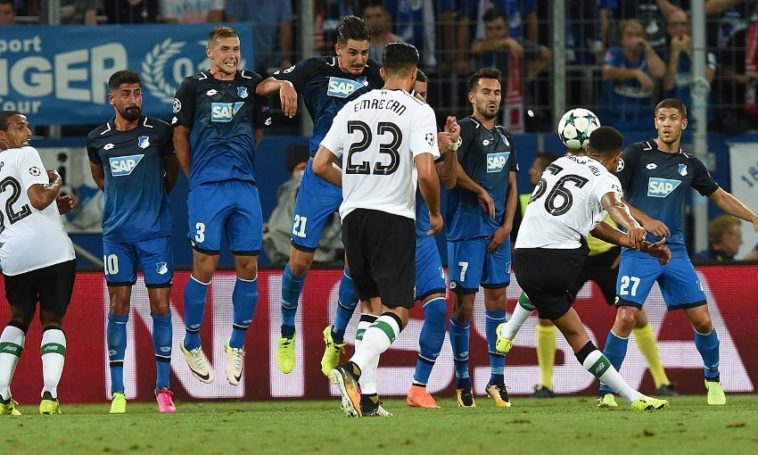 Liverpool entered their Champions League qualifier knowing that no English team had ever lost one. Read our match report on an important match for the Reds.

Hoffenheim named a strong attacking side for their encounter with Liverpool. The exciting duo of Wagner and Kramaric started; between them they scored 26 Bundesliga goals last season. Serge Gnabry should add to Hoffenheim’s attacking prowess this season.

Liverpool named an unchanged side from their game against Watford at the weekend. Wijnaldum and Can continued to deputise for Coutinho and Lallana whilst 18-year-old Alexander-Arnold started in place of the injured Nathaniel Clyne.

Roberto Firmino returned to the club where he made his name in Europe. The Brazilian played 140 league games for Hoffenheim scoring 38 goals.

The first chance of the game fell to Hoffenheim as Gnabry raced in to the penalty area and then ran straight in to Lovren. The referee saw nothing in it but the official behind the goal gave a penalty. After a controversial decision to award the penalty Kramaric stood up to take it. Kramaric’s effort was a poor one and it was as routine as a penalty save could be for Mignolet.

Just minutes later Salah managed to receive the ball on the halfway line and ran clear through on goal. Under pressure his effort goes wide from a shot on his weaker right foot.

A cynical challenge from Bicakcic on Mané resulted in a yellow card and a free-kick to the Reds. With half an hour gone young Alexander-Arnold curled in a brilliant free-kick from nearly 30 yards out. The young full back convinced his teammates to give him the chance and they were rewarded with a 1-0 lead.

Just before the half-time whistle blew Alexander-Arnold continued his set-piece taking skills. This time it was an in-swinging corner which Lovren headed narrowly wide.

There were fewer clear cut chances for the majority of the second half. However with 15 minutes to go James Milner, who had come on for Henderson, whipped in a ball which took a slight deflection off Nordtveit and curled in to the top corner. Liverpool had gotten a potentially crucial second away goal, 2-0.

As the game entered its final 10 minutes Hoffenheim were mounting the pressure and Liverpool were struggling to cope. Sure enough Liverpool conceded a late goal in the 87th minute as they were looking to hang on. Uth controlled the ball on his chest before rifling the ball in to the bottom corner from outside the box. It was poor defending from Alexander-Arnold who was appealing for offside rather than challenging Uth.

It ended 2-1 to Liverpool who will take a hard fought lead back to Anfield as they look to see the tie off.

Liverpool Still Fragile at the Back

Jürgen Klopp is entering his third season with Liverpool but he still seems unable to inspire confidence in to his defence. Liverpool’s nervous and fragile looking defence stretches all the way back to when Roy Hodgson was in charge.

Once again the Reds struggled to see out a winning position conceding yet another late goal. It might not cost them the tie this time but just like at Watford it’s only a matter of time before they throw away another result.

Liverpool’s poor record of defending set-pieces is often cited as a prime example of why they are unable to hold on to results. However it seems that the defence consistently look uneasy when asked to do any sort of defending.

This game was just another example where Liverpool looked likely to concede every time Hoffenheim got forward. They tried to defend deep to see out the game but the inviting pressure just seemed to make things worse.

If Jürgen Klopp can’t inspire some confidence in to his defenders he’s set for another season littered with disappointing results.

Man of the Match: Sadio Mané