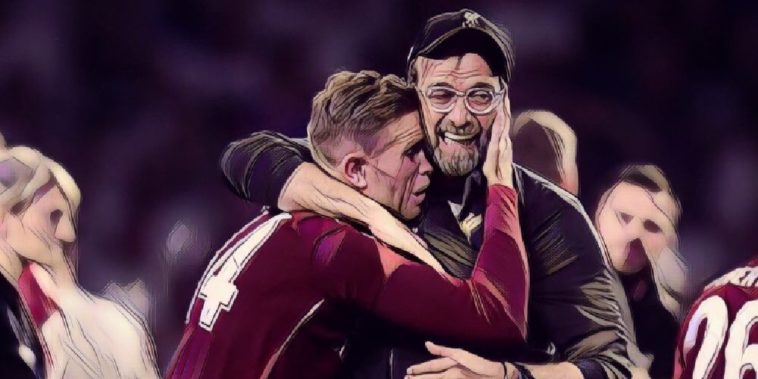 Liverpool captain Jordan Henderson has hailed the influence of Jurgen Klopp, saying that Champions League glory would be ‘impossible’ without the German at the helm.

After all the hype and build-up, ultimately, the Champions League final was a game that was lacking a great deal of quality, but Liverpool were ultimately crowned European champions for a sixth time thanks to goals from Mohamed Salah and Divock Origi.

In what was only the second all-Premier League Champions League final, Salah got Liverpool off to the perfect start from the spot inside the first two minutes after Moussa Sissoko was contentiously adjudged to have handled the ball inside the box.

Spurs had plenty of opportunities to draw themselves level throughout the game, but following on from his heroics against Barcelona, substitute Divock Origi came off the bench to ensure that the European Cup would be heading to the North West of England rather than the South East to round off a 2-0 win in Madrid.

After becoming the first Liverpool captain since Steven Gerrard in 2005 to lift the European Cup aloft, Jordan Henderson was quick to praise the influence of his manager, Jurgen Klopp.

“Without this manager this is impossible. You go through tough times in a season, but what he has done since coming in is unbelievable,” Henderson told BT Sport.

“There’s such a togetherness, he has created a special dressing room – all the praise goes to the manager.

“I’m so proud to be a part of this football club and to cap it with this is so special to me .

“I just try to give my best every time I play football and to help my team no matter what. I’ve had tough times but I’ve kept going – just as this club has.

“It’s the best moment of my life, this is what I dreamed of since I was a kid.

“It’s not about me, it’s not about me being captain or lifting the trophy, it’s about this club, these players, this manager. Now we must keep going and kick on.”