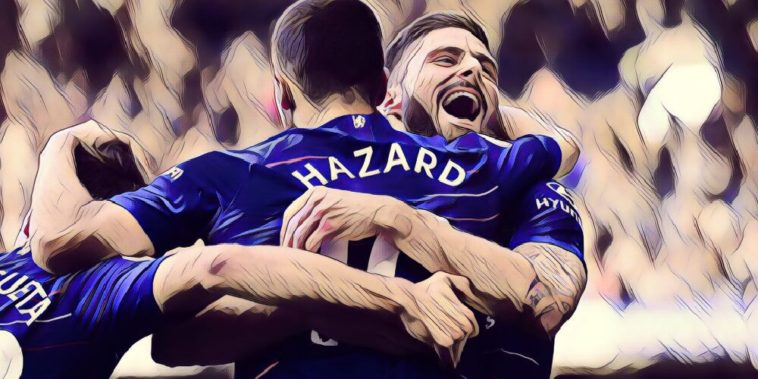 Eden Hazard has made an extremely bold prediction about his team-mate Olivier Giroud, describing him as maybe the best target man in the world.

Hazard, who picked up the man of the match award after his hat-trick heroics for Chelsea was full of praise for the France international, who set up two of his goals in the 4-1 over Cardiff on Saturday.

The first saw Giroud play a lovely lay-off into the path of the Belgian, who looked up and smartly fired past Neil Etheridge in the Cardiff goal from the edge of the box.

Giroud was at it again when Pedro fired the ball into the box from wide, and instead of trying to create a chance for himself, he unselfishly played in Hazard who was in a better position to score his second.

Despite having been widely criticised for his performances at the World Cup where he could barely manage to get a shot on target, Hazard has praised Giroud for his hold up play:

“Olivier’s a target man, maybe the best in the world, I think so,” Hazard told the Chelsea website.

“When he gets the ball he can hold the ball and we can go in deep with him, so for us it’s a pleasure to play with him.

“When Alvaro was playing it’s completely different, he’s a different player than Olivier, but they both have great qualities, so I’m happy to have good strikers in the team.”