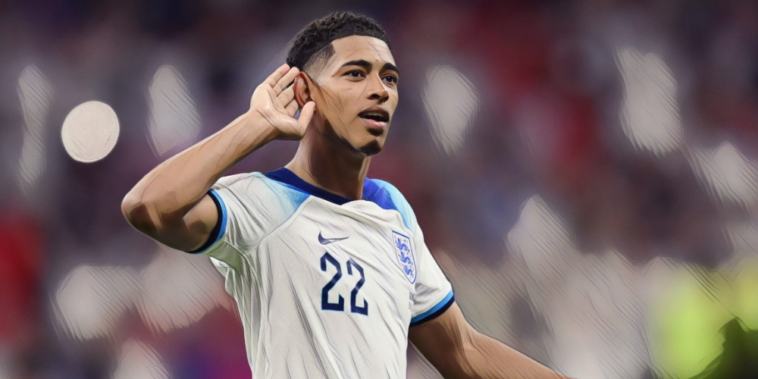 Despite England getting dumped out of the 2022 FIFA World Cup in Qatar after losing 2-1 to rivals France in the quarter-finals, 19-year-old star Jude Bellingham played some fantastic football throughout the tournament, which has only increased his transfer fee valuations.

How much is Jude Bellingham said to be worth?

According to the CIES Football Observatory, Bellingham was the most valuable player throughout the tournament and is said to be worth somewhere in the region of £175 million (which is approximately €202 million). Let’s take a quick look at several other players that also currently have extraordinary market values:

Three other players that also currently have relatively high values that range from around £95 million to £101 million (€110 million to €118 million) are Manchester City’s Ruben Diaz, Arsenal’s Bukayo Saka, and RB Leipzig’s Josko Gvardiol. Many sports betting sites are currently taking bets on where some of these players may head next in the upcoming January transfer window. Many of today’s most trusted UK online sports betting sites also have the best football betting options with competitive prices and a wide range of markets to choose from.

The rumours are swirling that the next club Jude Bellingham will sign for after a successful two years at German Bundesliga side Borussia Dortmund is English Premier League side, Liverpool. However, conflicting rumours are saying that he will NOT end up at Liverpool because of the high valuation and that Liverpool are simply not willing to fork out £175 million for the prolific midfielder.

He is a highly sought-after player, and he could play in any league in the world. In other words, he could end up playing in La Liga for Barcelona (although highly doubtful considering the dire money situation that the club currently finds itself in) or Real Madrid (more likely). There’s also a chance he could go to Manchester City, but are they willing to fork out such a huge sum of money after spending a whopping £100 million on Jack Grealish?

Could he sign for PSG? They certainly have enough money to bring him to the club, but do they actually need him? Borussia Dortmund will certainly want to make some money from their star man, but the huge asking price could mean that he ends up staying at the club for another season or two.

Can Dortmund win the league with Bellingham?

In other words, it wouldn’t be a safe bet to put your money on Dortmund to win the league with these prices. However, anything can happen in football, and it’s still early days. They are currently sitting in sixth place with 25 points after 15 games. In comparison, league leaders Bayern have 34 points after 15 games played.