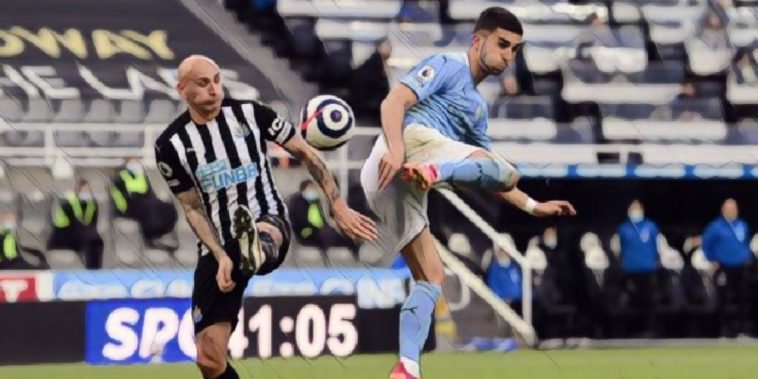 Newly crowned champions Manchester City twice came from behind to secure a hugely entertaining 4-3 win in a topsy-turvy game against Newcastle.

With City already crowned as champions following Man Utd’s defeat to Leicester this week, and the relegation places already confirmed, both sides came into the game with little to play for, Pep Guardiola handing forgotten goalkeeper Scott Carson a first Premier League appearance in 10 years.

Steve Bruce had come into the game having been named the Premier League manager of the month earlier in the day, and the former defender saw his side go ahead with a goal he would have been proud of himself, Emile Krafth rising highest to power home a 25th minute header from a Jonjo Shelvey corner.

The Magpies came agonisingly close to doubling their advantage 10 minutes later as Shelvey saw a free-kick come back off the bar, only for Joao Cancelo to level the scores at the other end as his deflected strike crept into the bottom corner in the 39th minute.

After a dominant first period, City would turn the game around before the break as Ferran Torres pulled off a superbly executed backheeled flick to loop the ball into the back of the net from an Ilkay Gundogan free-kick.

However, Newcastle would still manage to go into the break level on terms, the ever-influential Allan Saint-Maximin driving towards the City area at pace before Joelinton was brought down in the box by Nathan Ake. The penalty was awarded following a lengthy VAR deliberation, with the much-maligned Newcastle number 9 stepping up to smash the ball past debutant ‘keeper Carson.

The north East side would be awarded another spot-kick on the hour mark following a trip by Kyle Walker on Joe Willock, and while Carson saved the Arsenal loanee’s tame effort, the youngster got to the rebound to slide his side ahead once more.

Ridiculously, within four minutes of going behind, City would score twice to regain the lead once more. Torres levelled the scores as he stabbed home from six yards following a drilled Gabriel Jesus cross, before he reacted the quickest to complete his hat-trick after Joao Cancelo’s strike had come back off the post.

After regaining the lead, City strangled the life out of the game, enjoying huge swathes of possession to set a new record of 12 away wins in a row.

Speaking afterwards, Pep Guardiola admitted he was expecting a ‘distracted’ performance after his side’s midweek celebrations.

“It is good, the fact that we won. 12 times [in a row] never before no side could do it, so happy for that,” he told Sky Sports.

“We made mistakes because we are the champions, players were distracted a little bit. This is normal, we knew it. But the spirit from the first minute was absolutely there.

“We made a comeback at 1-0, we made a comeback at 3-2 so really pleased, and hopefully we can learn from our little bit of distraction. Three set pieces, they are so tall, so aggressive, and we concede some counter attacks that normally we don’t do it. We have to improve on that, but today I knew it could happen. But we won, we are going to celebrate and prepare for the game against Brighton.”

Ferran Torres’ hat-trick came after being deployed in a central role, and Guardiola was full of praise for the Spaniard’s contribution to the side.

“Not just this evening – of course this evening was important – but it is his first season in England and his numbers are exceptional,” he said.

“He came as a winger and then I had to think about playing him as a striker because when we were without Sergio [Aguero] and Gabriel [Jesus] with injury and covid, he played as a striker and he was there. He scored against Leeds, he scored against Crystal Palace and when he played he has shown a sense of goal.”

Asked if he is a serious contender to be a number nine, Guardiola insisted: “Yeah, he can be. He has the talent. This season, he was brilliant and now his rhythm has increased a lot. At the start, he was a little bit soft, but the game against Crystal Palace, he made a turn. So good. The best game I think he has played.

“The movements he played as a striker, always runs in behind, and, I don’t know why, but the last goal, it hits the crossbar, where did the ball come? Where he is! This is the smell, the sense of goal. The striker knows, anticipates, intuitive to know where the ball is going one second before it arrives, and he has this talent. Very pleased for him.”

City have been linked with splashing the cash this summer on the likes of Erling Haaland or Harry Kane, and the Catalan was asked if Torres’ performance could change the clubs transfer plans.

“I don’t know what is going to happen. Maybe we buy a striker, maybe we don’t. I don’t know if it is possible, but we have a young guy, a good transfer, and I can use him left, right and as a striker.”