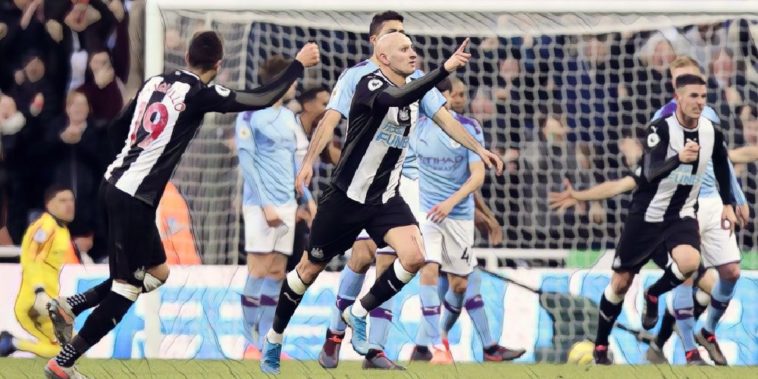 Manchester City’s title hopes took yet another massive blow, Pep Guardiola’s side twice being pegged back in a 2-2 draw with Steve Bruce’s Newcastle.

Newcastle may have gone into this game all the way down in 14th in the table, but had already beaten the likes of Manchester United and Spurs so far this season, though a point against the reigning champions is possibly their result of the season thus far.

Man City twice took the lead at St. James Park, though Pep Guardiola’s side were unable to hold on to it for long, Jetro Willems equalising three minutes after Raheem Sterling’s opener, before Jonjo Shelvey levelled the scores again just six minutes after Kevin De Bruyne’s thunderbolt with his own superb long-range strike.

The result leaves City eight points behind league leaders Liverpool, who play Brighton in one of Saturday’s 3pm kick-offs. Speaking at his post-match press conference, Pep Guardiola was understandably disappointed that his side couldn’t hang on to their lead having “found a way” through the Magpies packed defence.

They dropped 16 points in all of last season. #NEWMCI pic.twitter.com/ea1EAr4Qyo

“It’s what we’ve lived the last four years. We found a way and today, we found it again but unfortunately, at the end, we conceded a goal,” the Catalan said after the match.

“We could not score all the chances we had; they scored the two chances they had.

“We have to accept it, work on strengths and learn from it.

“It’s tough but we have just two days to recover.

“In good moments, be calm. In bad moments, live these kind of moments.”

See Also: Where it went wrong for Emery and why he had to go