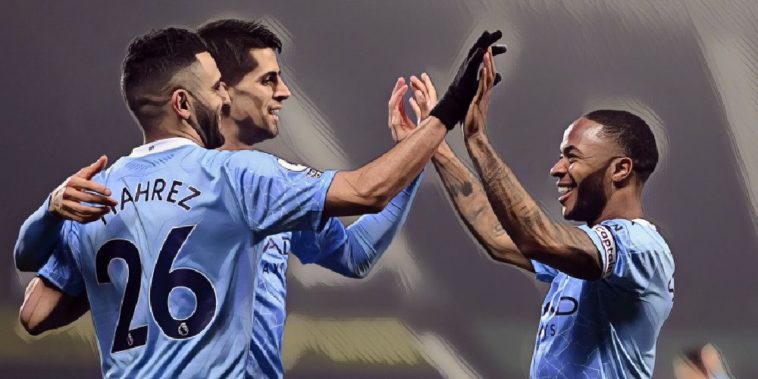 Manchester City moved to the top of the Premier League with a resounding 5-0 win over relegation-threatened West Bromwich Albion on Tuesday night.

The Citizens have been in flawless form since they were held to a 1-1 draw by the Baggies back in mid-December, winning all 10 of their matches in all competitions to surge up the table.

Pep Guardiola’s side certainly wasted no time to get started on their demolition of Big Sam’s side, opening the scoring inside six minutes. Joao Cancelo floated a lovely lofted ball over West Brom midfield, with Ilkay Gundogan taking a touch to set himself, before firing it into the bottom left corner from the edge of the box to leave ‘keeper Johnstone flat-footed.

Less than halfway through the first half, City doubled their advantage, Bernardo Silva receiving the ball in the right channel before cutting the it back to Cancelo who despatched a peach of a shot into the top corner. His effort was immediately ruled out for an offside in the buildup, though VAR reviewed the decision to find the Portuguese to clearly be onside, and duly overturned the assistant referee’s flag.

Minutes later it was three as Gundogan continued his fine recent form with yet another goal, the German robbing the ball on edge of the box, rolling past Dara O’Shea and slotting past Johnstone with a lovely finish.

Three became four just before the interval as Riyad Mahrez cut onto his left foot in trademark fashion before firing home following a floated ball across the box from Raheem Sterling.

Sterling scored one of his own in typically Manchester City fashion, the 26-year-old tapping home from close range as Mahrez squared the ball across the Baggies’ six-yard box just before the hour mark.

City continued to enjoy virtually unparalleled possession for the remainder of the game, but were unable to add to their tally, and speaking afterwards, Pep Guardiola was delighted with his side’s concentration and determination which took his team a point ahead of Manchester United.

“It was a good performance, good results in the game,” Guardiola told Match of the Day.

“We tried to put the players in the best condition, be humble enough and concentrate enough to do what we have to do and respect our opponents.

“We are at the end fighting because football is difficult. Everyone is solid and in this situation and this month we have the commitment and it’s so good.

Next up for Manchester City is a home tie against Premier League whipping boys, Sheffield United, a game which the Catalan insists he is firmly focussed on, rather than the title race.

“One or two days off and then prepare for Sheffield United. It’s the only way I know to be a manager – just think about Sheffield.”