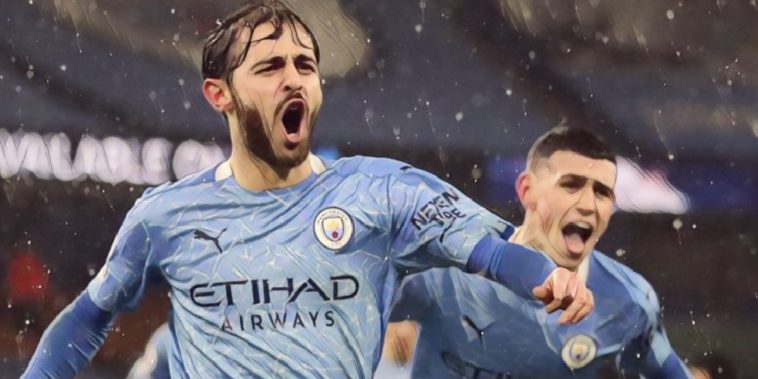 Manchester City continued their excellent recent form with another win and a clean sheet in a 2-0 win over Aston Villa.

It was an entertaining first half at a rain-soaked Etihad, and while Man City predictably dominated possession and had the majority of chances, both sides had opportunities and were forced into some good defending.

Phil Foden had a number of chances throughout the game, including one on the stroke of half time as Raheem Sterling released Kevin de Bruyne with a wonderful ball from inside his own half, the Belgian playing what looked like an impossible pass to Foden, though his side-footed effort was blocked by Matty Cash.

Villa sat deeper after the break as City continued to threaten, while the Villains looked to hit on the break, with Bertrand Traore leading an excellent breakaway early into the second period only to see his good work down the right undone by a disappointing finish, while Ederson also clawed away a Douglas Luiz effort minutes later.

The visitors were however forced into some stoic defending at times, and their resistance was finally broken with just 11 minutes left to play, Bernardo Silva curled home a sublime effort from the edge of the box. However, it was a goal laced with controversy as midfielder Rodri came from an offside position before retrieving the ball in the buildup, a decision which left Dean Smith incensed and earned the VIlla boss a red card.

City made sure of the result as they were awarded a 90th-minute penalty, the ball striking the raised arm of Cash from close range before Ilkay Gundogan stepped up to despatch the resulting spot-kick down the middle.

Speaking afterwards, Pep Guardiola was delighted with his side’s display, pointing out his teams increased aggression in the second half as crucial to the win.

“It was a very good performance again, against a top side,” he told BT Sport. “They are very dangerous and just look at their results this season. A big victory.

“The most difficult thing is to score a goal, in the second half we were more aggressive.”

Asked about the controversy surrounding his side’s opener, Guardiola came over all Arsene Wenger by saying he didn’t see it.

“Yeah [I’d have been unhappy if it were against my side]. There is VAR here no? So, I don’t know the rule or the situation but they analysed it.”

The result moved Man City to the top of the table ahead of Man Utd’s trip to Fulham, the Blues having won their last six Premier League games, though the Catalan wasn’t getting carried away.

“No one else has won five, six in a row but it’s still the first leg of the season. A lot of games to do but the important thing is that the feeling is good.”