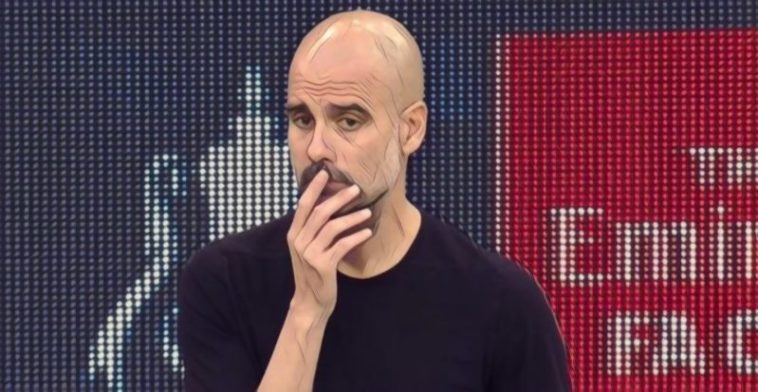 Manchester City’s hopes of winning a treble of cup competitions this season came to an end tonight, with Pep Guardiola’s side slipping to a 2-0 defeat against an impressive Arsenal outfit at Wembley.

Despite Man City dominating possession right from the off, it would be Arsenal who almost opened the scoring after 15 minutes, though Pierre-Emerick Aubameyang fired straight at Ederson when through one-on-one.

However, the Gunners talismanic number 14 would make amends just minutes later, the Gabon international poking home at the back post from a excellent Nicolas Pepe cross.

Guardiola’s side emerged for the second period with renewed vigour, and in-form attacker, Raheem Sterling, twice shot just wide in the first few minutes after the break.

Next up to go close for last seasons winners was Riyad Mahrez, although Gunners keeper Emi Martinez was equal to the Algerian’s powerful low drive.

City continued to lay siege to the Arsenal goal, but the Gunners always looked dangerous on the break and a fine counter-attack in the 71st minute saw them double their lead.

The goal would come from a familiar source, with Aubameyang racing on to a sublime ball over the top from Kieran Tierney, before the 31-year-old slid his finish between the keeper’s legs for his second of the game.

City pushed and probed in search of an equaliser until the death, but it eventually became obvious that it was simply not their day and they would not be able to breach a surprisingly resolute Arsenal rearguard.

Speaking afterwards Guardiola admitted his side simply hadn’t played well enough to beat the side managed by his former assistant.

“We didn’t make a good performance, we were not ready enough,” Guardiola told BT Sport.

”If you don’t play for 90mins in a semi-final this can happen. We didn’t play good, we are human beings. The opponent played good, sometimes it happens.

“The only regret is that we didn’t play the first half like we played the second one. We had to change the setup but we couldn’t do it.”