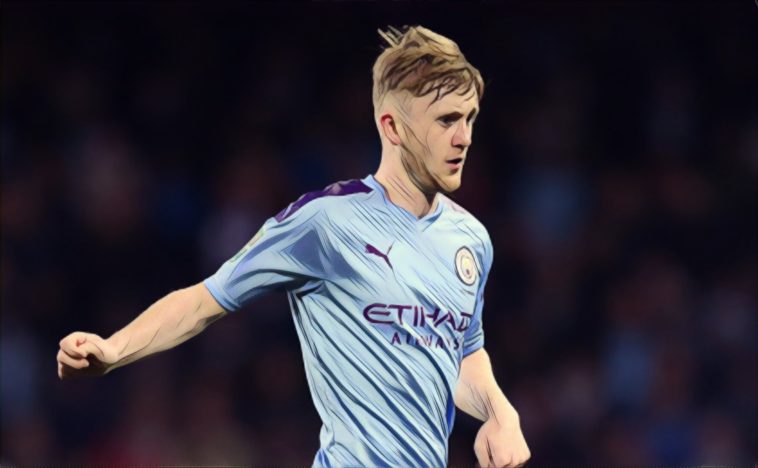 Pep Guardiola has praised the performance of Tommy Doyle following the youngster’s debut in the club’s 3-1 Carabao Cup victory over Southampton on Tuesday night.

The 19-year-old was one of four academy graduates named in Guardiola’s starting line-up at the Etihad, as the holders cruised through to the last eight thanks to Nicolas Otamendi’s opener and a Sergio Aguero double.

Doyle’s first appearance for the club saw him follow in the footsteps of his famous City family; the teenager’s paternal and maternal grandfathers – Mike Doyle and Glyn Pardoe – were former City teammates and regarded as club legends after distinguished careers in the blue half of Manchester.

Guardiola praised the youngster’s debut showing, whilst also reserving praise for 18-year-old defender Eric Garcia who once again impressed at the heart of the defence.

“Eric Garcia has once again played a high level, like has this season and last season in the Carabao,” Guardiola said.

“He didn’t make one mistake. Tommy, as well, he played well in position that isn’t his natural his position.

“I thought he played really well. Congratulations on his debut. I’m so sorry for Ian Carlo Poveda who was about to come on – but at 3-1 the game wasn’t over and after Angelino’s injury, John Stones had to play.”

Doyle was handed his debut as Guardiola opted to rotate his squad, though the club comfortably progressed to the quarter-finals as they look to win the trophy for a third successive season.

The City boss admits his depleted options meant he had to make changes, but says he had no doubts over his young player’s abilities to step-up to competitive senior action.

“We had just one holding midfielder available – Ilkay Gundogan – and he’s played a lot of games.

“We have Fernandinho who can play there but he is playing centre-back (and was suspended tonight).

“It was also a good opportunity to play Sergio and Gabriel Jesus together, playing closer to the goal. Gabriel is an incredible fighter defensively.

“This competition is good to move the team on. We played seriously; the quality of our passing was high.

“It’s not easy to attack the system Southampton had, with eight players back and fast players up front. Generally, it was a good game and we go through to the quarter-finals.

“The Carabao Cup is really good for the young players and for the players who didn’t play in the last game.

“It’s a good competition. We are already at the quarter-finals, so we’ll see who we get in the draw.

“You cannot win four titles in one season when you don’t play games so seriously. For the players who didn’t play the last games it’s good for me to see the rhythm they have and I was happy with what I saw.”

See Also: Top ten most saves by a goalkeeper in a single Premier League match