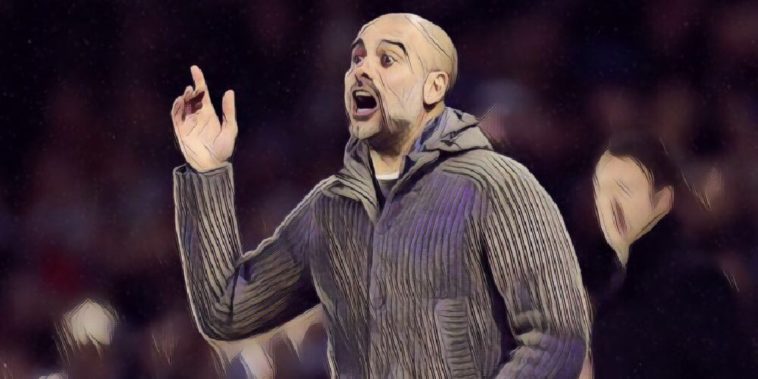 Pep Guardiola apologised after his Manchester City side benefitted from some controversial refereeing decisions to progress to the FA Cup semi-finals with a 3-2 win over Swansea.

The Championship side took a shock 2-0 lead in South Wales, with Matt Grimes and former City youngster Bersant Celina giving Graham Potter’s side a two-goal lead at the interval.

Man City hit back in the second period with Bernardo Silva pulling one back with a sweetly struck strike with the outside of his boot before a contentious penalty decision brought City level.

Cameron Carter-Vickers was adjudged to have brought down Raheem Sterling in the penalty area, though replays suggested the US international made contact with the ball. Substitute Sergio Aguero stepped up, hitting his spot-kick against the post only for it to fortuitously bounce back off Swansea goalkeeper Kristoffer Nordfeldt for an own goal.

With no VAR for the tie, City were again the beneficiaries as they found a winner. Aguero appeared to be offside as Bernardo Silva crossed, though no flag was raised as the Argentine headed home.

Despite progressing to the last four and keeping his side’s hopes of an unprecedented ‘quadruple’ alive, Guardiola was in apologetic mood post-match.

“All around Europe there is VAR. Here there is not. I don’t like to win in that way. I am sorry,” Guardiola said in his post-match press conference.