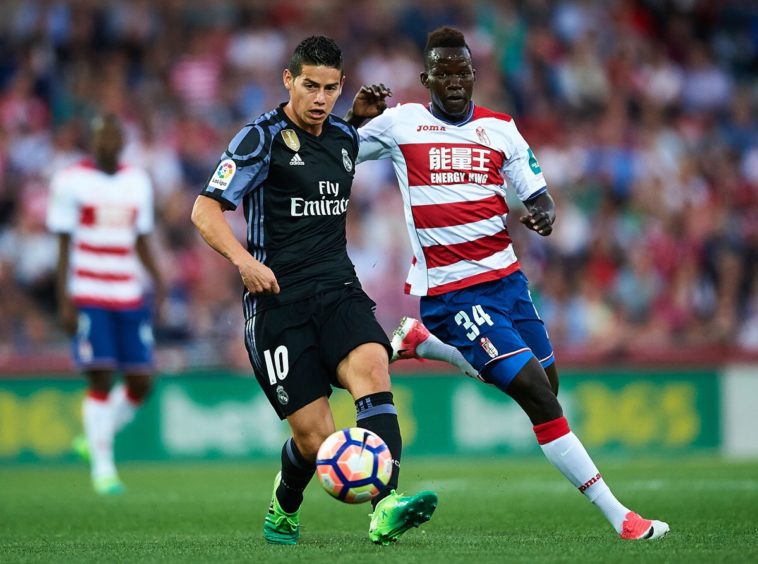 Despite making nine changes from the squad that beat Atletico Madrid midweek, Zinedine Zidane’s Real Madrid side had no trouble brushing away an already relegated Granada.

James Rodriguez opened the scoring just three minutes in after tapping in from a Lucas Vasquez cross.

Five minutes after his first goal, James doubled Real’s advantage after heading home from a rare Fabio Coentrao assist. This was James’ 8th goal of the season in the La Liga.

Nigerian forward Kalu Uche replaced Aly Malle after 18 minutes in what looked to be a tactical substitution for Granada, but it had little effect as Real Madrid ran riot.

Los Blancos tripled their advantage at the half hour mark as Alvaro Morata scored in a similar fashion to the first goal, Danilo being the man assisting Morata.

To take Granada’s misery to the next level, Real’s second highest goal scorer Morata put another one past a frustrated Guillermo Ochoa. Dribbling past two players, Morata thumped one past the Mexican from inside the box.

Lucas Vasquez came close to getting a fifth goal three minutes before half time but his shot hit the post.

Referee Villanueva blew for half time, ending an extremely one-sided half of football. With Real scoring for fun and Granada having nothing to play for, the game was all but over.

Adams brought on Spanish defender Lomban for Rene Krhin right at the start of the second half, in a probable effort to keep Real from scoring more.

Karim Benzema, Isco and Mariano Diaz all got a run out in the second half, Asensio, Casemiro and Vasquez coming off respectively.

As the ref blew for full time, a frustrated Granada camp was relieved that the one-sided affair had finally come to an end. Coach Tony Adams said he was “proud” of Granada’s performance in the second half, showing intent and not conceding.

Granada’s season is in limbo now, being relegated and having nothing to play for except pride.

The La Liga run in

The situation is the complete opposite for Real though, who are second on goal difference to FC Barcelona. Real Madrid appear to have the advantage over the Catalonian side due to the game in hand but Real’s fixtures will be definitely tougher than Barcas. With Sevilla, Celta Vigo and Malaga to play in their remaining three games, it won’t be an easy task for Real Madrid. The good news is that Los Blancos need to win 2 and draw 1, which will still be easier than winning all three.

Barca’s final two games are much easier, playing against two mid table teams in Las Palmas and Eibar. Considering their form, defeating the two sides should not be much trouble for FCB.

Despite everything, Real Madrid are still favourites to win the title, with an extra game in hand. The Champions League semi-final might be troubling, but with their 3 goal advantage, that should be no problem as well.

As an interesting season winds down with Real poised to lift the title, it’s theirs to lose.