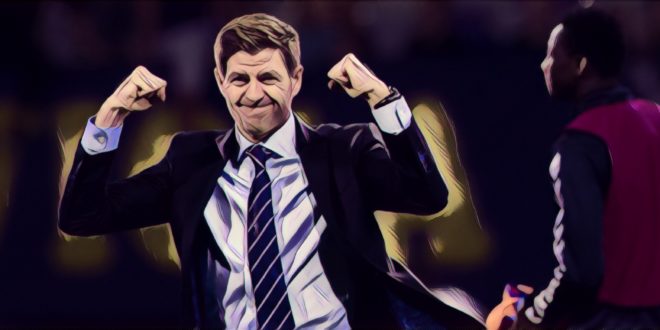 Steven Gerrard has spoken of his pride after seeing Rangers produce a ‘faultless’ performance to book their place in the Europa League last 16 with 1-0 victory at Braga.

The Scottish side headed to Portugal preserving a one-goal advantage following a thrilling 3-2 comeback victory at Ibrox last week, though there was none of the drama this time around as Ryan Kent scored the only goal of the game to seal a 4-2 aggregate success and Rangers’ progress to the next round.

Rangers have wobbled domestically of late but produced a fine performance on their return to European action, with Gerrard lavishing praise on his side following their execution of his ‘game plan’.

“It’s one thing giving a team a game plan, but it’s another trusting them to carry it out,” Gerrard told BT Sport.

“I thought they were faultless, certainly out of possession. Super proud of the players. To a man, they were outstanding.

“The idea was to let their back five have the ball because they were the least dangerous players on the pitch. We knew we had to give the ball up but when we won it, we had to be brave to go and create.”

Gerrard insisted Rangers’ showing will help answer some of their critics from recent weeks, and says his side will be prepared for any challenge ahead of the draw for the next round on Friday.

“This is no fluke,” he said. “This is something that’s been earned with sheer hard graft and to a man everyone sacrificed themselves for the club.

“When you represent Rangers and results are indifferent, we understand criticism is going to come our way. At times we’re going to have to take that on the chin.

“But we knew there was an opportunity tonight, which would’ve been really special from where we’ve come from to now.

“We’ll be really proud when we sit there and the draw’s made. We’re ready for whatever comes our way.”

Listen to our latest podcast…