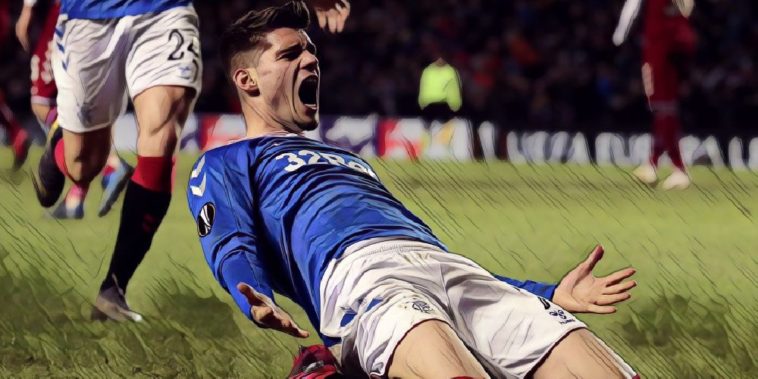 The Scottish side will take a lead to Portugal ahead of the second leg of their Round of 32 tie, courtesy of an incredible second-half fightback on a memorable European night at Ibrox.

Gerrard’s side found themselves two goals down just before the hour-mark as Fransergio and Abel Ruiz handed the Portuguese side a comfortable cushion, though Rangers would fightback as Ianis Hagi halved the deficit before substitute Joe Aribo’s solo goal drew the host’s level.

Hagi would complete the comeback with his second of the evening, firing home a deflected free-kick to spark jubilant celebrations and seal a 3-2 first leg victory in Glasgow.

“Fantastic night,” Gerrard told BT Sport. “Obviously, very pleased for the supporters. I think we rediscovered ourselves, particularly with our second-half performance.

“We were disappointed with a few things at half-time. We wasn’t really carrying out the gameplan that we had prepared, but, I think you have to give them credit, they are good team, some excellent players with a lot of technical ability.

“The first goal is obviously an outstanding strike, and we’ve been caught for the second as well, so, we’ve beaten a good team tonight, but I’m much more pleased with the second half showing because we were more positive, there was more belief, and we never give up.”

The win extended Gerrard’s impressive European record as a manager, the 39-year-old having lost just three of 29 Europa League fixtures since taking charge of the club, and the Rangers boss was full of praise for his side’s ‘character’ following their latest display.

“We showed unbelievable character, the lads never gave up,” Gerrard added. “The second half, we ran hard for each other, we were compact, we were more organised, had a better shape, and we were on the front foot more.

“We never gave ourselves that chance in the first half, I thought we were a bit negative and a bit loose with our passing, and good players punish you and we got punished a couple of times.”