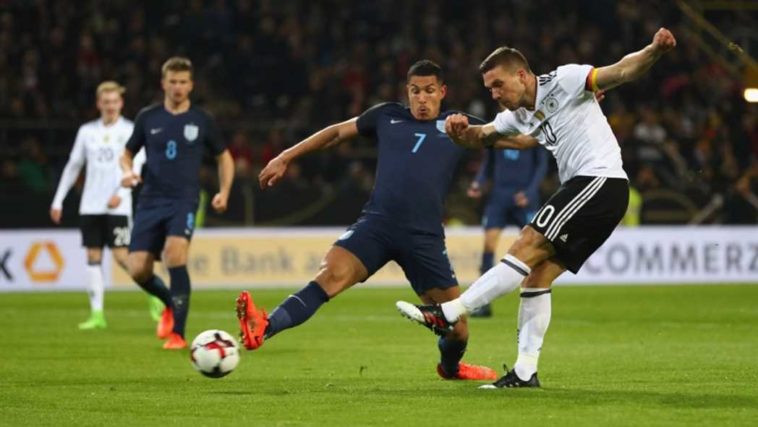 England were beaten 1-0 by the old enemy Germany in a friendly in a Dortmund. Here are five things we learned from the fixture.

Lukas Podolski will be greatly missed

After 13 years, the former Arsenal forward retired from international football on Wednesday with 130 caps and 49 goals for his country. Podolski was given the honour of wearing the captain’s armband for his final game in a German shirt. Manager Joachim Low said before the game: “It’s not easy to replace Podolski in the team. He is unique. He is one of the greatest players that Germany has produced.” High praise indeed.

There was a tribute before the game got underway and Podolski, of course, was full of emotion. The German international signed off in style with an absolute screamer in the 69th minute. Joe Hart had no chance at saving that one. Only Miroslav Klose (71) and Gerd Muller (68) have scored more for Germany than Lukas Podolski.

Michael Keane was not phased by the occasion at all. The 24-year-old defender made his debut against Germany and was as calm and composed in possession as he is when playing for Burnley. He blocked Podolski’s shot early on in the first half and his overall game was very assured.

He’s tall, quick and confident on the ball. Keane has the potential to become a fantastic centre-back for England. There is no doubt the top six clubs will be looking to sign him in the summer.

Germany were just as efficient without Manuel Neuer

Germany were without Manuel Neuer for the friendly but Marc ter Stegen was more than capable of filling the role. England’s best chance in the first half came through Dele Alli but ter Stegen made himself big so that Dele’s shot was straight at him. Ter Stegen did not have many saves to make during the match but he was a safe pair of hands between the sticks and gave his defence confidence.

The England captain was not part of Gareth Southgate’s squad for the matches against Germany and Lithuania. Rooney has been sidelined with a knee injury for the last two weeks but even if he was fit, he might still have missed out. Southgate wants all of his players to be playing regular football and Rooney does not fall into that category at the moment.

With Southgate giving opportunities to the likes of James Ward-Prowse and Nathan Redmond, there are other options instead of Wayne Rooney. As for the captaincy, Gary Cahill is more than capable of fulfilling the role. He may not have as much experience, but he is a quality defender who leads by example.

The Three Lions have got to be more clinical

England played really well in the first half and had the better opportunities to score. However, they failed to make them count. Adam Lallana hit the post and Dele Alli’s strike was straight at ter Stegen. All it took was one sensational strike from Podolski to seal victory for Germany.

If England had been more clinical, they could have had the advantage at half-time. It doesn’t matter who the opponent is, England need to be more ruthless. Jermain Defoe did not make an appearance but perhaps he is being saved for the World Cup Qualifier against Lithuania on Sunday.