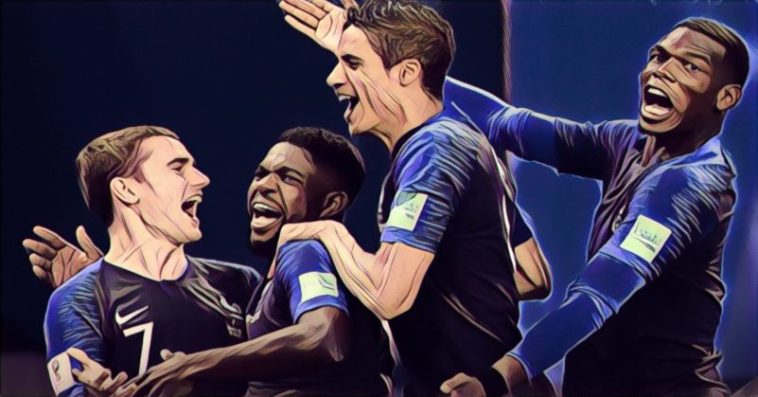 A fascinating encounter featuring world-class talents on each side was ultimately decided by a 51st minute Samuel Umtiti header and Les Blues will now face either Croatia or England in the final in Moscow on Sunday. Here is how the players rated …

Made a superb stop from club mate Alderweireld which would prove crucial and stood up well to the Belgian onslaught in the second period.

Got skinned by Hazard a few times, but all in all another impressive display from a youngster that continues to show maturity beyond his years.

Immense. The Real Madrid centre-back put in a truly world class defensive display; blocking, heading and tackling anything that came near him.

Scored the all-important winning goal and much like his defensive partner Varane was a rock at the back for Les Blues.

Started shakily but recovered well to put in a solid display, despite Belgium attacking down the right flank for long periods.

It was his energy and ability to read and break up attacks that allowed his team a way back out of a period of Belgian dominance in the first half. He continued to cover every blade in the second period and must be an absolute nuisance to play against.

No flicks, no tricks and very little attacking threat with the ball at his feet. But this felt like a coming of age performance by the Manchester United man, who showed high levels of maturity, discipline and tactical awareness during the last half an hour when his team were under the cosh – basically everything he has looked incapable of doing since his £89 million return to Old Trafford.

Even in a squad with the attacking riches that this France side has the 19-year-old PSG star is Les Blues go-to guy. Mbappe’s pace and skill were a constant menace and he emerged as the game’s best attacking player. His drag and flick to play through Giroud was otherworldly. This kid has everything and we’ll all be telling our grandkids about him someday.

Left his shooting boots at home on a couple of occasions, but still, he linked the play well at times and he showed great maturity during the closing stages.

An absolute workhouse, who showed on a couple of occasions tonight that he’s actually a lot better on the ball then he usually gets credit for.

Missed a big chance in the first period, although it’s hard to escape the feeling that for all France’s attacking brilliance it is the Chelsea target man who knits it all together with his hold up play and wall passing.

Had no chance with France’s goal, and still made a couple of top-drawer saves.

Started brightly but faded as the game went on, with his delivery from wide positions letting him down on several occasions.

A couple of sloppy moments early on, but his distribution was excellent for the most part and is another player who emerges from this World Cup with his already glowing reputation enhanced.

Barely put a foot wrong, and deserves massive credit for even lasting the 90 minutes at this level considering the injuries he’s had:  a true warrior.

Was burned badly by Mbappe within the first minute, however, he stuck well to what in fairness must have been a nightmare task marking the French superstar.

Solid and composed in the centre of the park, went close with one rasping long-range drive late on.

Sadly for the Spurs man, he was nothing like the commanding figure we see in the Premier League every week and was the first player to be sacrificed when his side needed to chase the game.

He is a truly world-class attacking midfielder, but this was not the Manchester City stars night and it seemed at times that he was actually trying too hard. He did, however, play a driven long ball towards Lukaku at the death that was inches from its target and had it connected it would have gone down as the pass of the century.

Another solid display by the big bruiser, he covered loads of ground in the centre of the park and was tidy in possession. He may not be everybody’s cup of tea but managers just can’t resist picking him.

He looked untouchable early on and was the games best player up until half-time. France, however, seemed to negate his impact for the early part of the second half and although he went on a couple of brilliant runs late on he was unable to make the required impact.

He’s had a great World Cup but big Rom was well and truly pocketed by Varane and Umtiti tonight. To be fair there is no real shame in that and he worked his socks off for his team.

Put in a couple of decent deliveries from the right flank, but wasn’t really able to impact the game enough.

Pushed and probed late on, although he was unable to find any chinks in France’s solid defensive armour.

No impact. Which is a shame really as we all would have loved to see him nearly knock himself out with the ball again.