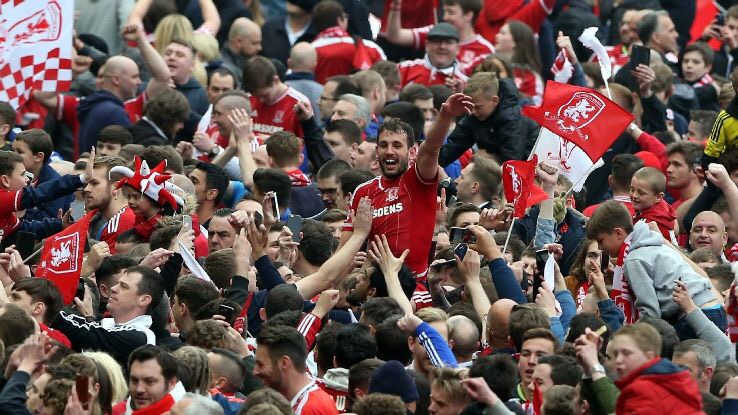 It’s time. It’s time to look to the future. Let’s face it, this season has gone, it’s over bar the three games we’ve got left to at least make some impression on the Premier League and its audience.

After the Man City game, and the Sunderland one prior to that, a haul of four points has got some Middlesbrough supporters daring to dream again…just. I beg you, please accept our fate.

It’s a write off

The only reason I’ll enjoy the Chelsea game is the same reason I enjoyed the City game last Sunday: we’ve no hope, no chance, no way of getting out of the bottom three.

The pressure’s off, we can approach the games with nothing to lose. If I’m going to be doing anything between now and the last game against Liverpool on May 21st, it’ll be looking forward to next season.

This season is a write off; we’re almost playing three more friendly games. If by some miracle Hull lose to Sunderland and we end up beating Chelsea at Stamford Bridge on Monday then I’ll still believe it’s beyond us.

There’s just no way it’s ending with any other outcome. We’re down, let’s get used to it, let’s embrace it and think about all the exciting things we have to look forward to next season.

New signings, new manager (hopefully), stadiums we may not have visited in a long while. Games coming thick and fast, allowing us to move on from a disappointing defeat within a fraction of the time the Premier League allows. Some of the week long waits for games this season have been mind-numbingly awful. Not saying we should look forward to losing in the Championship, but you get my point. It’s relentless.

There are 46 games to play, more home games for your money. More chances to win and win well, with more reason to believe we’ll be looking down at everyone in the league rather than just looking…well, down.

The talk has already started about who might be coming in to take on the managerial reins. Yes, Steve Gibson may have made those comments about Steve Agnew and how he wants him to be around for years to come, but he didn’t say specifically in what role. Steward perhaps? He looks menacing enough, would you misbehave if he gave you the death stare in the stands?

Seriously though, there’s no denying Agnew’s a top bloke, a great coach, but he’s not a No.1 is he? I know that, you know that, the whole of Middlesbrough knows that. If he could stick around in a coaching capacity then great, he’s got the club at heart and wants to do his best for Boro, but it has to be said, we need an experienced head.

So, if we’re all going to get our wish and someone new comes in, who’s it going to be? It’s been almost four years since we last had this excitement. I don’t know about anybody else, but I’m constantly on betting sites (I don’t have a problem, honestly) checking out the odds and seeing who the runners and riders are.

Strangely there’s been no mention of Alan Curbishley? Stranger still though is seeing Massimo Maccarone leap on to the market, Bucharest style, I mean who’d place a bet on him? Someone will I suppose.

It’s these little titbits of excitement though that is taking me away from the painful reality of our current plight. Seeing Ryan Giggs coming in at 14/1, it’s got people talking.

I see other names on the list; Guus Hiddink, Roberto Mancini, Frank De Boer and Claudio Ranieri. Yes, yes, I know. It’s never going to happen. I’m sure Bernie Slaven would bare all again in Binns window if one them joined, but it’s that not knowing that’s got me a little bit giddy.

I’ve spent all season trying to be positive, backing Aitor Karanka until he left, then trying my best to get up for Agnew’s appointment, but then a wave of negativity struck me and left me feeling like I’d wasted all that time and energy being so optimistic.

Two decent results in the last week could have swayed me back to that of an ‘everything’s rosy’ persuasion, and it has for some, but I can’t bear to go there.

This summer is going to be action packed, there’s going to be an overhaul in the playing staff. Ok, we’re going to lose Ben Gibson, that’s going to hurt. We’re going to wave adios to Alvaro Negredo, Adama Traore and Victor Valdes. Calum Chambers will be heading back to Arsenal too.

However, the money coming in from the sale of Gibson coupled with the Parachute Payments should see us in a great position, ready to splash the cash.

I ridiculed Newcastle as they spent fortunes on the like of Matt Ritchie, Dwight Gayle and the others. Not because they’re bad players, far from it, but I knew they’d be all the types of players who’d soon be shipped out when The Geordies inevitably (sadly) got promoted. Rafa Benitez will have big money to spend; he’ll not need the likes of Daryl Murphy when he could be bringing in top class internationals.

But what they’ve done this season is what we should be doing next; get promoted using players who you know will get you out of the division. There’s plenty of exciting talent down there just waiting to be enticed to Rockliffe. Who needs the prima-donna type’s?

Gaston Ramirez may have helped us up last year, but his attitude stinks and there’s no way he’ll be up for any sort of promotion fight next time out.

The likes of Tom Ince, Britt Assombalonga, Tom Cairney and Alex Pritchard. These are top quality players at that level, players who Boro would surely be a big draw for given what the club can offer them. Not just in terms of money, but the facilities and set up.

It’s not just the above players I’ve mentioned; there’ll be players from the Premier League potentially, as well as some canny loan signings too. But we’ll also have the basis of a great squad before any incomings.

Let’s not forget, we’ll have one time Championship Player of The year Patrick Bamford, as well the likes of Adam Clayton, Dani Ayala, George Friend, maybe even the recently rejuvenated Stewart Downing?

Marten De Roon seems to love it at Boro, he’d be a great asset to the squad in that division. Rudy Gestede could be a cracking focal point; with plenty of service there aren’t many who’ll be beating him in the air at that level that’s for sure.

Allow yourself to move on

I may have digressed a little so I’ll reign myself back in.

The point I’m making is that all the above will contribute to what is sure to be an intriguing, exciting and eventful summer. Basically it’ll be everything this season hasn’t been in the main. It’s the promise of all this that’s helping me move on from this season’s total disaster of a campaign.

So join me. Join me in what’s about to come. Let’s not wallow in what’s gone before. We’ve done enough of that, it’s time to move on.

For the remainder of this season let’s enjoy it, but not get blinded by false hope and worrying about what everyone else is doing and the different permutations. Let’s just focus on enjoyment, no pressure. Let’s sing our hearts out and be happy. It may have been a stinker of a season but after Bournemouth away it ended.

We’re going down and there’s nothing we can do about it. But I’m not sad, I’ve long since mourned, grieved over what has been a total let down. I’m now focusing on next season.

Burton away, Tees/Wear derbies (which I’m sure will have more riding on them than the recent tawdry affair had). Games against Leeds again, always highly charged affairs. We haven’t had that in the Premier League to be fair, but we’ve got it next season.

Anyway, roll on Monday and the visit to Stamford Bridge. Am I expecting anything from the game? Absolutely not. Am I expecting to feel the intense feeling of despair, the hope fading with each goal that Diego Costa and his mates tuck away? No. My hope faded weeks ago.

All that’s left is emptiness toward this season. Roll on the summer and all that it promises!

(If by some miracle we survive, then please disregard all of the above and assume that I was always confident we’d make it out of the bottom three).

Good analysis of the season I think we might give Chelsea a fright.