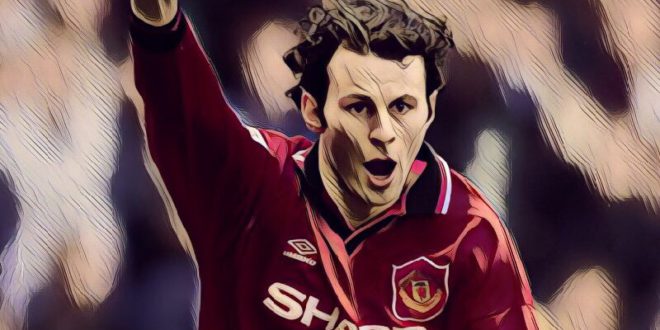 Ryan Giggs is one of British football’s best ever players and Manchester United’s leading appearance maker of all time. He was there for the inception of the Premier League and he played in England’s top division until he retired in 2014. This shows the longevity of the Welshman and his record of winning a quite frankly ridiculous 13 EPL titles will more than likely never be matched.

Giggs started off as pacey winger before converting to a central playmaker later in his career. The Red Devils legend amassed an impressive 109 goals and 162 assists in the Premier League. That’s not counting the goals he provided in Cup competitions and European football for Manchester United. So with a huge library to choose from, here are five of his best goals….

Ryan Giggs was actually going through a very difficult period in 2003 as his form had dipped. This game, however put him back on the right track.

Giggs intercepted a sloppy Antonio Conte pass, then ran with the ball through the centre. The Juventus defenders couldn’t get near him because of his sheer pace. When he got into the box he finished the run off by sliding the ball into the bottom corner with his right foot. It was his second of the game after coming off the bench and it proved that he was still a world class player.

Now for another superb solo goal from Ryan Giggs.

He beats the first QPR player to the ball by touching it past him, then another player tries to get the ball from the Welshman, but Giggs excellently uses his quick feet to go past him. He then continues his run into the left side of the area and fires the ball past the goalkeeper. It was a fantastic display of speed, close control and balance as the QPR defenders couldn’t handle the United number 11.

QPR were not the only ones though as two years prior Tottenham had the same problems against Ryan Giggs.

There didn’t seem a whole lot of danger as it was heading to the Tottenham defence until a Spurs player slipped as he was chesting the ball. Giggs then pounced knocking the ball past the grounded defender and then excellently nutmegging the second defender. Before using his pace to take the ball round the keeper and slotting the ball into the goal. Giggs was only in his second year of senior football at this point and this goal was an indication of the star he would become.

The ball was played over the top to Giggs who had just made a run into the box. He was in-between two Chelsea defenders meaning that if he took a touch to bring it down he wouldn’t have the time or space to shoot. So instead with his first touch he dinks the ball with the outside of his foot over Petr Cech into the back of the net. It was a very clever finish from the Manchester United man as that was the only thing he could do in that situation that would lead to a goal.

You can’t have a list of the greatest Ryan Giggs goals without this one. This is the most famous goal of his long career because not only of it’s quality, but it’s importance.

Deep into extra time Giggs collects the ball in his own half and he starts running, there doesn’t seem a lot of danger at first with multiple Arsenal defenders in front of him.

However, this is Ryan Giggs we are talking about, he dribbles past two of them, but then he has two others really close at each side of him. He takes two quick touches to lose Martin Keown then he muscles away Lee Dixon but he still needs a good finish to get it past David Seaman from a tight angle. Luckily for United fans, he does just that as he rockets the ball into the roof of the net to win the game.

It was an incredible solo goal from Giggs and it gets replayed every year. It put United through into the final which they would go onto win in their brilliant treble winning season. A truly special goal from a special player.

CHECK OUT 15 OF THE BEST QUOTES ABOUT THE FORMER MAN UTD GREAT, RYAN GIGGS.