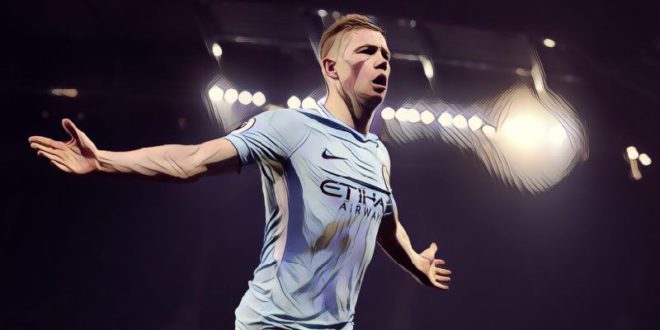 The Belgian has bagged thirty-five times in his 140 appearances for the Manchester giants, and the word ‘tap-in’ just isn’t in his vocabulary. It’s not easy to narrow down his backlog of screamers, but we’ve done our best: here’s the top five Kevin De Bruyne goals for Manchester City.

City are one up in a difficult away game looking to maintain their ever-increasing gap at the top of the Premier League. Gabriel Jesus has given City the lead, but Leicester have just hit the post.

We start with a goal unlike any other on this list. While the others are moments of something resembling relief as De Bruyne found a way to capitalise on City dominance, this strike came at the end of a scintillating counter-attack. Seconds after Leicester hit the post, the ex-Wolfsburg midfielder received the ball from Leroy Sané outside the box at the opposite end of the pitch.

For a few seconds, it looked like City had wasted the chance by overplaying it, but De Bruyne wasn’t giving up. Shifting it onto his weaker left foot, he whacked it hard into the top corner, leaving Schmeichel stunned and utterly helpless. Let’s put it this way, it’s no coincidence that it was shortly after this game that EA Sports upgraded De Bruyne’s weak foot on FIFA.

It’s goalless in the second half of this Champions League Quarter-Final tie after City managed a 2-2 draw in the first leg. Pellegrini’s men are on top but can’t break through a stubborn PSG defence.

In City’s greatest ever Champions League moment, Kevin de Bruyne was the man who propelled them. Supported by powerhouse performances from Fernando and Fernandinho, KDB scored his second goal of the tie late in the second leg- and it would prove to be the winner for the home side.

Latching onto a simple layoff, De Bruyne took a confident touch before curling an inch-perfect finish through the defence and into the bottom corner. Though the technique behind this goal is impressive, it’s the importance of it that gets it on this list. If not for an unfortunate own goal in the semi-finals, City could have progressed past eventual winners Real Madrid and faced Atletico in the biggest club game on earth – and all because of one wonderful De Bruyne winner.

City are absolutely demolishing Newcastle United at the Etihad. After going behind, Sergio Aguero is in the middle of an astonishing five-goal blitz.

Now we take a break from the traditional Kevin de Bruyne long-range screamer to appreciate an altogether different goal. In one of the most memorable matches of the 15/16 season for City fans, in which Aguero stole the show with a record-breaking performance, this moment of brilliance from KDB stood out as the best goal of the game.

Jesus Navas put a teasing cross into the penalty area and De Bruyne, not one to be overshadowed, improvised a brilliant overhead finish into the back of the net to leave the Newcastle defence shellshocked.

It’s City’s first game since winning the Premier League and Swansea are already 2-0 down shortly after half-time. City are playing well, but Swansea have resorted to sitting back and limiting the damage.

While this will surely go down as one of the most unimportant goals scored in the Premier League this season, it’s certainly one of the best. Danilo did well to win possession back high up the pitch with his dogged pressing, but the rest was pure Kevin de Bruyne magic.

The Belgian let the ball run across his body before taking two light touches and letting rip from far outside the area. His finish, powerfully buried past Fabianski and into the side of the net, put the game beyond doubt for the Citizens and put De Bruyne in the running for strike of the season. Look up ‘piledriver’ in the dictionary and you’ll get the time and date of this goal.

Guardiola’s City need to win in order to propel themselves back to the top of the Premier League. The away side are on top but Chelsea have survived so far.

Regarded by some as the moment Manchester City announced themselves as the new best team in England, this De Bruyne rocket sunk champions Chelsea like an iceberg to a cruiseliner. After huffing and puffing to no avail for much of the match, City’s talisman took matters into his own hands, playing a neat one-two with Gabriel Jesus before unleashing an unstoppable shot from outside the box.

There are few sounds in football more satisfying than the ball hitting the back of the net. But what really stands out for me is the furious power behind the strike. It was a finish that typified City’s attitude in this season – that no matter how clubs tried to stop them, they would find a way to win. And that, for me, is what makes this winner against Chelsea Kevin de Bruyne’s best Manchester City goal.