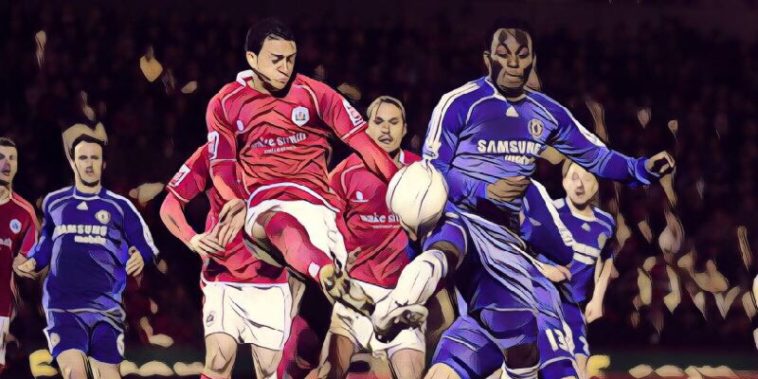 With so many great games throughout the history of the famous old tournament, here is Part two of our look at the FA Cup’s biggest and best giant killings.

During the buildup to the game, Wycombe boss Lawrie Sanchez was forced to post an advert on Ceefax begging for any strikers to come on trial. Belfast-born journeyman Roy Essandoh was one of those to see the advert, and he ultimately earned himself a week-to-week contract and a place on the bench for this huge FA Cup tie.

Steve Brown put the visitors ahead early with a close-range header, before Muzzy Izzet tapped home an equaliser as Leicester threatened to show their superiority.

Sanchez was then dismissed from the dugout for a foul-mouthed tirade after a penalty shout was turned down. He was forced him to watch the rest of the game on a m television somewhere in the stadium, and he only just made it in time to see Essandoh win the game for the Blues. It would be his only goal of the season, but what an important one it was.

Perhaps the closest thing we’ve had to a repeat of Sutton United’s success in 1989, with Wrexham having finished at the very foot of the Football League in the season prior to their third round meeting with Arsenal, who were the reigning champions of the old First Division.

Wrexham had only avoided a plummet into the Conference on a technicality,  with the club who were due to replace them not having a ground up to scratch.

The Gunners were given an uncomfortable time until striker Alan Smith broke the deadlock, but were unable to double their advantage. They were then made to pay when a soft free-kick decision allowed 37-year-old former Manchester United and Chelsea veteran Mickey Thomas to equalise with a rasping strike. Steve Wadkin then scored an unorthodox effort last David Seaman to seal a famous victory for the Dragons.

A historic game at Carrow Road saw a non league side knock out a Premier League side for the first time ever, in what was the biggest giant killing since Sutton beat Coventry back in 1989.

The game, which featured on loan striker Harry Kane, was a close affair – remaining goalless until the last stages of the encounter.

Then, in the 80th minute, substitute striker Scott Rendell who had only been on the field for six minutes, fired the Hatters info the lead with what turned out to be the winner.

After beating Liverpool in the fifth round, giant killers Barnsley were handed a home tie against Chelsea.

Despite making plenty of changes, Chelsea boss Avram Grant fielded a strong side which featured the likes of John Terry, Nicolas Anelka, Michael Ballack and Michael Essien amongst others. However, the Tykes provided another massive shock by dumping yet another Premier League giant out of the cup.

The only goal of the game came in the second half when Kayode Odejayi got on the end of a Martin Devaney cross to send Oakwell into raptures. Despite a late Chelsea onslaught, the Reds held on to secure their place in the semi finals.

After beating Championship high flyers Brighton in the fourth round, non league Lincoln were rewarded with a trip to Premier League Burnley.

A frantic final few minutes saw the momentum swing one way and then the other before Sean Raggett rose above the Burnley defence to head past Tom Heaton. It was a nervy final few minutes for the Imps, who managed to hold on to become the first non league side in 103 years to qualify for the FA Cup quarter finals.