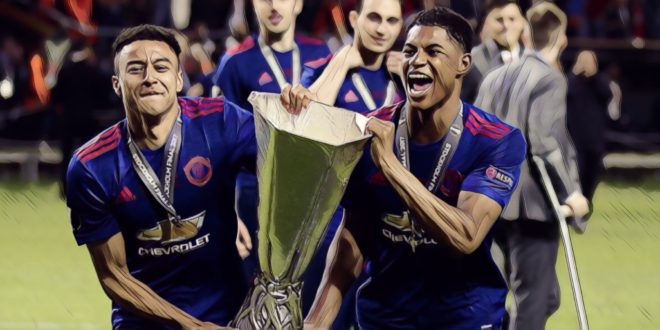 The Europa League group stages reached their conclusion last week with each of the three Premier League clubs having secured their qualification to the knockout stages.

Joining them will be Scotland’s Celtic and Rangers who have both impressed in European competition so far, and following the draw for the Round of 32, each of the five British sides will have high hopes of progressing further.

So for those of you interested in sports betting tips, here are the five favourites to win the 2019/2020 Europa League.

The Italian giants have dropped into the Europa League after being the odd one out in a Champions League Group of Death containing Barcelona and Borussia Dortmund.

Despite their early Champions League exit Inter possess a wealth of quality in their ranks and have been instantly installed amongst the favourites for the Europa League, Antonio Conte’s side having been drawn to face minnows Ludogorets in the round of 32.

It’s a favourable draw for the Serie A side and the likes of Romelu Lukaku and Lautaro Martinez will be relishing a realistic chance of winning silverware in this competition, though much may depend on their league campaign with the club currently embroiled in a tight title race with serial champions Juventus.

Only Sevilla have won the tournament more times than Inter, though Italian clubs have struggled to make their mark on Europe’s secondary competition in recent years with the last victory being Parma’s success way back in 1998.

Inter’s last victory was the year prior to Parma’s triumph, though the club will harbour realistic ambitions of a lifting a European trophy this season for the first time since treble success under Jose Mourinho in 2010.

Last season’s runners-up, Arsenal will be hoping to go one better this season in what looks to be their best route into next season’s Champions League following a disappointing start to the season domestically.

Europa League specialist Unai Emery has been sacked by the club following their poor campaign, however, Arsenal are now expected to name former club captain Mikel Arteta as their new head coach in the coming days.

The Spaniard’s lack of experience makes him a gamble but there is quality in the squad he will inherit, most notably captain Pierre Emerick-Aubameyang and Alexandre Lacazette with the forward duo key to the North London side’s run to last season’s final.

Summer additions such as Nicolas Pepe and Dani Ceballos are yet to truly work out, though a change in manager could perhaps invigorate a squad that has performed well below expectations as they bid to lift silverware and return to the Champions League following a three-year absence.

Arsenal comfortably qualified for the knockout stages despite a shaky end to their group stage campaign, though face perhaps the most difficult tie of all the British teams in the next round against Olympiakos.

The Greek side made life difficult for Tottenham in the Champions League before dropping down, though the Gunners will have to show they can beat the likes of Pedro Martins’ side if they are to have ambitions of lifting the trophy.

Another of the Champions League drop-outs, Ajax made a surprise early exit from a competition in which they reached last season’s semi-finals.

The Dutch side topped their group heading into the final round of fixtures but a surprise defeat to Valencia coupled with Chelsea’s victory over Lille saw Erik ten Hag’s side drop into the Europa League.

Despite losing star duo Frenkie de Jong and Matthijs de Ligt to Barcelona and Juventus respectively during the summer, the Eredivisie champions still possess more than enough talent to make a real impact in the latter stages of this competition.

Moroccan international Hakim Ziyech continues to star having scored nine goals and provided a further 15 assists in all competitions already this season, the 26-year-old ably supported by the attacking quality of Dusan Tadic and summer signing Quincy Promes.

Ajax will face Spanish side Getafe in the first knockout stage, a difficult task against a side pushing for Champions League qualification in La Liga this season.

The Spanish side will be looking to win a record-extending sixth title, having enjoyed unprecedented success in this competition winning the tournament five times since 2006.

Those successes include three consecutively between 2014 and 2016, and few possess the EL knowhow of the La Liga side. Having finished sixth in the Spanish top flight last season, Sevilla are now under the guidance of former Real Madrid and Spain coach Julen Lopetegui and spent over £130m this summer strengthening their squad.

Key players Wissam Ben Yedder and Pablo Sarabia may have departed in big-money moves to Monaco and Paris Saint-Germain respectively, though Sevilla have bolstered their squad with no fewer than 13 new additions and currently sit third in Spanish football’s top flight.

Sevilla breezed through the group stages with five wins from six, only losing to Apoel Nicosia with their qualification as group winners already assured and they will meet Romania’s CFR Cluj in the next round.

The Spaniards may have enjoyed a summer of overhaul, but few possess their pedigree in European competition and they are rightly considered amongst the Europa League favourites.

Previous winners of the tournament two years ago, Manchester United are back in the Europa League this season and are the bookmaker’s favourites to lift the trophy in Poland next May.

Ole Gunnar Solskjaer’s side have endured an indifferent start to the league season but came through a straightforward group in comfortable fashion, sealing qualification with two games to spare before securing their position as group winners with a 4-0 victory over AZ Alkmaar last time out.

The club will be confident of progressing further despite drawing Champions League drop-outs Club Brugge in the Round of 32, the Belgian side having been comprehensively beaten in the group stages by both Real Madrid and Paris Saint-Germain.

Brugge did, however, spring a surprise with a draw at the Bernabeu, in a clash that will act as a warning to the dangers awaiting Solskjaer’s side as they plot their progress into the latter stages.

Bolstered by the signings of Harry Maguire, Aaron Wan-Bissaka and Daniel James during the summer, United are expected to invest again in the January transfer window and additional signings could make the difference as they bid to lift the Europa League for a second time.