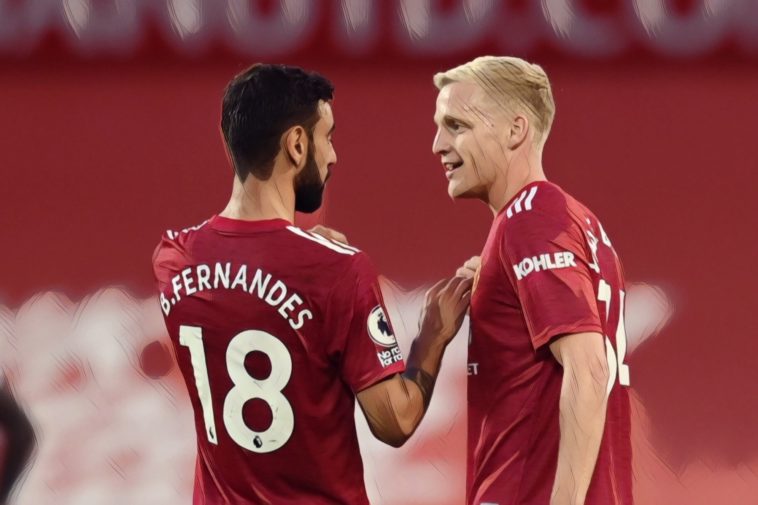 Bruno Fernandes insists he and Donny van de Beek can play together in the Manchester United midfield following the club’s impressive recent form.

Van de Beek was handed his first Premier League start of the season during the club’s 3-2 win at Southampton last weekend, impressing as part of a midfield diamond as the Red Devils came from two goals down to secure a comeback victory.

The Netherlands international was making his second successive start in all competitions after a frustrating start to his career at Old Trafford, and Fernandes is now eyeing more minutes alongside the summer signing following a four-game winning run for Ole Gunnar Solskjaer’s side.

Fernandes praised the performance of the 23-year-old at Southampton and insists the duo can play together as part of the same midfield, insisting his side have a number of quality options as they seek the perfect balance in the engine room.

“Every midfielder in our team has quality,” Fernandes said, as per the Mirror.

“Donny has a lot of quality. We know we can play together and also with other players we have. Everyone has quality to play and we know each other. We can play with three today then switch and play the next game with another three or another four.

“It doesn’t matter because all of them have quality and we can all be together on the pitch, everyone can make a difference. Donny today played a really good game but Fred and [Nemanja Matic] were really important to us.

“We have to score first now! And now suffer like we suffer every game away! As I said before the team spirit today was unbelievable.

“I think, and I keep saying, the first half was good but we conceded two goals. We created some chances, the keeper made two big saves.

“Of course in the second half we scored the goals and maybe everyone says it was two teams in two halves, no, the team was perfect.

“We conceded two goals but I think the level was high in both halves and of course we scored in the second half which was better for us because we went from two goals down to 3-2.”