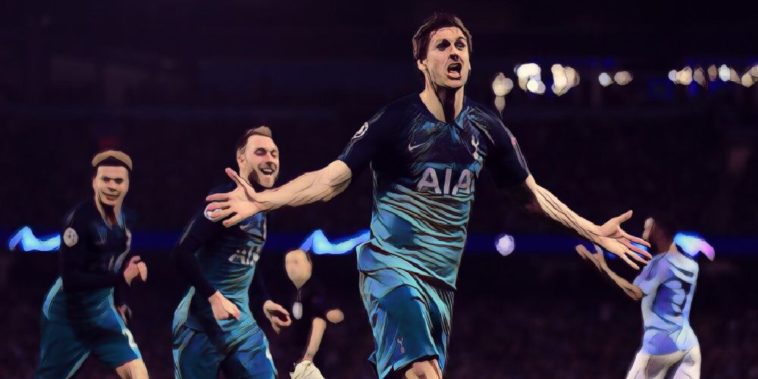 Rio Ferdinand thinks that Fernando Llorente’s Champions League winner against Manchester City should have been ruled out for handball.

In what was one of the most epic Champions League battles in recent history, Spurs upset the odds to dump quadruple chasing Man City out of Europe in a seven-goal thriller.

With Spurs going into the game with a 1-0 lead from the first leg, the Etihad crowd were treated to a frenetic start, with five goals being scored in the opening 22 minutes.

Sergio Aguero put the hosts in the driving seat just before the hour mark to make it 4-2, but in the absence of the injured Harry Kane, it was Fernando Llorente who would become the hero for the North London side after the ball hit the Basque striker in the 73rd minute before ending up in the Citizens net to put the visitors ahead on away goals.

However, replays showed that the ball hit Llorente’s elbow, and despite a VAR review, the goal was allowed to stand – a decision that was incorrect in the eyes of former Manchester United defender Rio Ferdinand.

“That’s off his arm for me,” Ferdinand told BT Sport.

“That’s hit his arm. Watch the skin on his arm, it moves.

“I’m just saying the ball’s hit his arm and then it’s up to the referee to determine whether its a handball or not.

“I think its handball personally I’ve got to be honest.”

There was more VAR based drama at the death when Raheem Sterling snatched what looked to be a late winner, only to see his strike ruled out after Sergio Aguero was adjudged to be narrowly offside in the buildup.

The result sees Spurs reach the last four of the Champions League for the first time in their history, where they will meet the conquerors of Real Madrid and Juventus, Ajax.