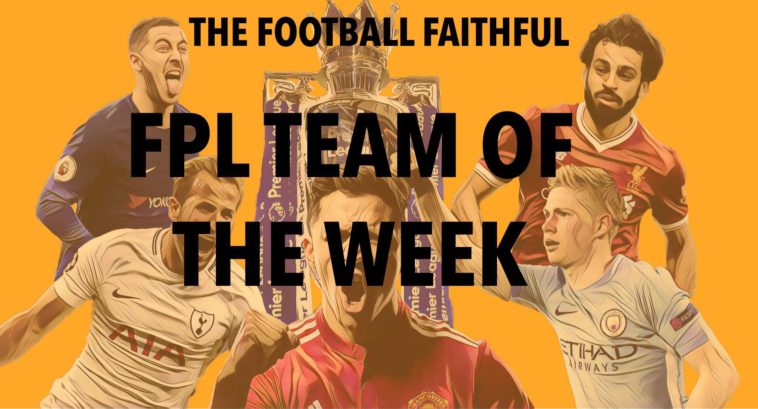 Liverpool secured another three points as Manchester City keep up the pressure with a win of their own. Manchester United maintain their 100% win record under Solskjaer, Newcastle United record an invaluable win against Cardiff and Southampton continue their run of good form under new manager Ralph Hasenhuttl. Here’s the Fantasy Premier League Team of the Week:

GK – Ben Foster (£4.5m): Burnley were held to a 0-0 stalemate by Watford, largely due to Ben Foster’s impressive performance between the sticks. The English goalkeeper helped his side to a hard-fought point and secured his fifth clean sheet of the season in the process. Can’t ask much more from a goalkeeper.

DF – Fabian Schar (£4.6m): Fabian Schar has only played seven full Premier League fixtures for Newcastle United but managed to bag his first and second goals for the club in a standout performance which earned him 21 points this gameweek.

A vital win for The Magpies which lifts them up to 17th place, two points ahead of relegation rivals Cardiff City.

DF – Danilo (£5.1m): Danilo has played the last five games on the bounce for Manchester City, after featuring only once previously against Bournemouth earlier in the campaign. However, he was pivotal in his side’s 3-0 win against Huddersfield Town, and managed to snatch his first Premier League goal of the season.

DF – Laurent Koscielny (£5.4m): Koscielny led Arsenal from the back in a crucial win against embittered London rivals Chelsea as the race for the top four heats up, with Manchester United hitting their best form of the season under Solskjaer.

Koscielny bagged his first goal of the campaign and delivered a fine defensive display in just his fourth 90 minutes of the season.

DF – Jamaal Lascelles (£4.6m): Lascelles’ header was unfortunate not to find the back of the net against Cardiff City. Instead it found Schar’s thigh and the back of the onion bag, as Lascelles claims the assist in Rafa Benitez’s sides vital win, enabling them to leapfrog Neil Warnock’s side.

DF – Sokratis (£5.1m): Greek defender Sokratis was a rock at the back against Chelsea and secured his first assist of the season as Unai Emery’s side shorten the gap between them and Chelsea.

Just Arsenal’s second clean sheet of the campaign with Sokratis at the back, but it came against a Chelsea side struggling to find goals at the moment, without the use of an out-and-out striker. Chelsea fans will be hoping Higuain can change that after his arrival this week.

MF – Diogo Jota (£5.9m): Diogo Jota bagged a hat-trick in Wolves’ dramatic 4-3 win against Leicester City. Jota was outstanding and clinical in front of goal, despite only managing to score twice this season before this game.

MF – Mo Salah (£13.6m): Mo Salah was among the goal again when he scored a brace against Crystal Palace, taking his tally for the season to 16. At £13.6m Salah is a massive spend, but 50.1% of Fantasy Premier League managers have selected him, and his goal return seems to make him worthwhile.

MF – Leroy Sane (£9.7m): Sane bagged a goal and an assist, taking his tally to eight and 11 respectively for the season. At £9.7m Sane is a great buy considering his consistent performances, and is selected by 17.2% of managers at the moment.

MF – James Ward-Prowse (£5.0m):  Ward-Prowse seals a place in the Fantasy Premier League Team of the Week for the second week running, scoring a crucially important goal against Everton to earn Southampton a 2-1 win. That’s back-to-back goals for Ward-Prowse who has played every minute of the last four games, and is proving his worth under new manager Ralph Hasenhuttl.

FW – Callum Wilson (£6.5m): In a week where a lot of strikers failed to find the net, Callum Wilson scored his tenth goal of the season in Bournemouth’s 2-0 win over West Ham United. It’s now 10 goals and eight assists for Wilson, who has been arguably the best value striker in the league this season.

How did your Fantasy Premier League team fare? Transfering out an injured Harry Kane allowed me to bring in some quality in midfield with Salah and Eriksen coming in, as well as an in-form Rashford up front. 68 points in total despite only having 10 players on the pitch with injuries to Alexander–Arnold and Luke Shaw prohibiting my side to play a full back line.