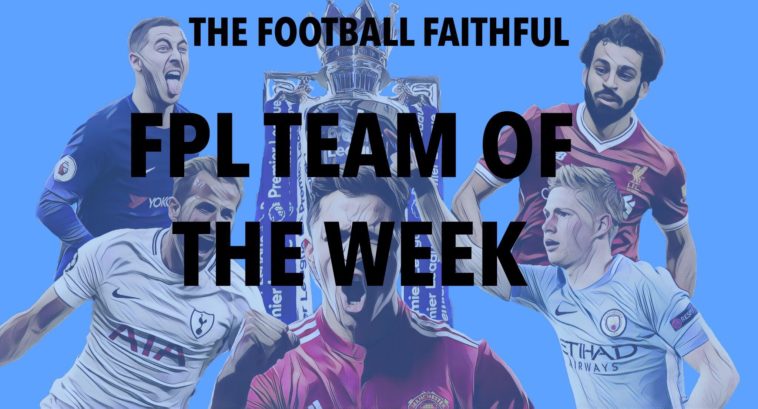 Ole Gunnar Solskjaer extended his wining streak to six games at Manchester United, West Ham United beat rivals Arsenal and Liverpool keep up their pace at the top with a narrow win against Brighton. Here’s the Fantasy Premier League Team of the Week:

GK – David De Gea (£5.7m): David De Gea was the star of the show in Manchester United’s hard-fought 1-0 win against Tottenham Hotspur. Juan Mata’s face at the final whistle was one of particular delight when he thanked De Gea, who became an immediate internet meme due to his string of fine saves. Just De Gea’s fourth clean sheet of the season, but he has now secured two in a row for the first time this season.

DF – Declan Rice (£4.4m): Rice scored his first goal for The Hammers in a defiant 1-0 win against London rivals Arsenal. To add insult to injury, it was former Gunner Samir Nasri who teed up the youngster for his finish. Ireland fans will be keeping an eye on Rice’s imminent decision on his international future, especially if he continues to perform as he has been all season.

DF – Kurt Zouma (£5.0m): Zouma scored a goal from the back, helping Everton to three points against Bournemouth, and keeping a clean sheet in the process. Zouma’s first goal of the season for Everton who are tenth in the Premier League table.

DF – Lucas Digne (£5.3m): Lucas Digne has been in fine form for Everton this season. He earned his third assist of the campaign, and helped record a clean sheet alongside Kurt Zouma to get Everton back to winning ways.

MF – Mo Salah (£13.4m): Mo Salah’s decisive strike from the penalty spot earned him his fourteenth goal of the season as Liverpool saw off the threat of Brighton Hove & Albion, and kept their strangehold on the top of the Premier League.

MF – James Ward-Prowse (£5.0m): James Ward-Prowse bagged his first Premier League goal of the season as Southampton managed to beat Leicester 2-1, moving them up to 16th in the table. Since Ralph Hasenhuttl’s arrival, Southampton have seen a massive turnaround in their fortunes and will be hoping to continue moving up the table under the Austrian.

MF – Andre Schurrle (£5.6m): Schurrle opened the scoring against Burnley with a magnificent first touch and strike to beat Tom Heaton. Schurrle hadn’t scored in his previous six games, but his goal against Burnley was his sixth of the campaign, although not enough for Fulham to come away from the game with any points.

MF – Pedro (£6.3m): Pedro’s delicate dink over Dubravka opened the scoring for Chelsea against struggling Newcastle. Pedro recorded his seventh goal of the season, as Chelsea earned a valuable win to consolidate their place in the top four, as Man United heat up their chase for the Champions League places.

FW – Gabriel Jesus (£10.1m): Jesus returned to Pep Guardiola’s side after missing the game against Liverpool last week, and netted twice against Wolves to secure another three points for Manchester City, who remain four points behind their Merseyside rivals.

FW – Shane Long (£4.7m): A collector’s item arrived for Southampton fans as Shane Long grabbed his first goal of the season, along with an assist in a vital 2-1 win over Leicester City. Long has been featuring more regularly under Hasenhuttel and after his man of the match performance, will be hoping to kick on and gain some momentum and confidence in front of goal.

How did your Fantasy Premier League team fare this week? A miserable showing more for my team, with a poor showing from captain Harry Kane and no goals scored by any of my selected players. 38 points, way under the gameweek average of 49.