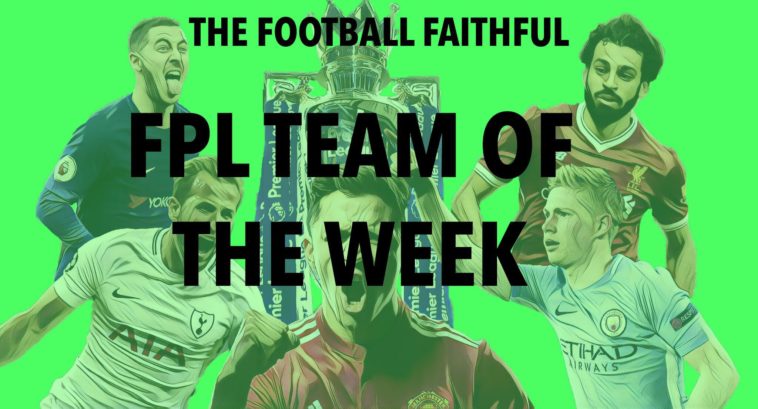 This Fantasy Premier League gameweek saw Manchester City keep their pace at the top of the table as they disposed of Manchester United in the local derby. Chelsea and Arsenal were held to draws in their respective fixtures, while Liverpool and Tottenham both managed to secure wins and keep the pressure on City.

Let’s have a look at the top performers in this week’s Fantasy Premier League Team of the Week:

GK – Joe Hart (£4.5m): Joe Hart earned his third clean sheet of the season away to Leicester City with a standout performance, pulling off a string of saves to deny the opposition. Burnley collected an important point away from home and will be hoping to secure some crucial points up for grabs against Newcastle United and Crystal Palace in their next two fixtures, which will help lift them away from the relegation zone.

DF – Juan Foyth (£5.0m): After a horrible Premier League debut last weekend against Wolves, where Foyth was at fault for conceding two penalties, the young Argentine defender reversed his fortunes by scoring the only goal of the game in a crucial win against Crystal Palace. A big test lies ahead for the youngster if he is to stop the attacking abilities of an in-form Chelsea side after the international break.

DF – Andy Robertson (£6.4m): Selected by 31.2% of Fantasy Premier League managers, Robertson has been a delight to watch at the back for Liverpool this season and topped off another fine display with one assist and a clean sheet against a struggling Fulham side. The Reds face a tough trip to Watford next week before welcoming Everton to Anfield in what is always a heated display.

DF – Trent Alexander-Arnold (£5.0m): The other of the two in-form Anfield full backs, Alexander-Arnold also managed to grab an assist and a clean sheet in another impressive performance for the youngster. The young England international is available for a far cheaper price than his teammate Robertson and looks to be improving every week under the guidance of Jurgen Klopp.

DF – Sol Bamba (£4.5m): Cardiff City secured their second Premier League win of the season in a 2-1 victory over Brighton where Bamba scored his second goal of the season. Cardiff move up to 18th in the table as the relegation battle begins to open up as we creep towards the busy Christmas period.

DF – Lewis Dunk (£4.4m): Dunk scored his second goal of the season, after he bagged one against Everton last weekend, but unfortunately it wasn’t enough as Cardiff swept Brighton aside in a tight 2-1 victory. Brighton will be hoping to put more space between themselves and the drop with important fixtures arriving in the form of Leicester, Huddersfield, Crystal Palace and Burnley.

MF – Callum Paterson (£5.2m): Paterson was the catalyst in Cardiff’s tight victory over Brighton, as he managed to bag an assist and net his third goal of the season. A standout performance from Paterson who helped provide Cardiff with a vital three points.

MF – Ivan Cavaleiro (£5.2m): Cavaleiro has struggled to cement a place in the Wolves team this season but his vital goal against a rejuvenated Arsenal team earned Wolves a point at The Emirates as Nuno’s men remain in 11th place in the table. They host Hddersfield Town before travelling to Cardiff the following week and will be hoping to pick up some invaluable points.

MF – Bernardo Silva (£7.5m): The tricky Portuguese midfieder starred in the Manchester derby and was the catalyst for two of City’s three goals at The Etihad. Guardiola’s side are showing no signs of slowing down as they prepare to face West Ham next week before travelling to Lyon for their next Champions League tie.

FW – Salomón Rondón (£5.7m): Newcastle fans will be delighted to see Rondon get off the mark with his first two Premier League goals for the club, earning them their second win of the season. Newcastle will be relying on Rondon to kick on and help the Geordies up front by bagging a few more goals. Two wins on the bounce lifts the Magpies up to 14th in the table. Rondon would be a good gamble if you can pick him up before he hits a goalscoring streak.

FW – Manolo Gabbiadini (£5.6m): Gabbiadini has struggled to get into the Southampton side this season but he smashed in his first goal of the season in a 1-1 draw with Wolves, and will be hoping that’s enough to earn him a starting spot in next week’s game against bottom of the table Fulham where there are likely to be opportunities for more goals.