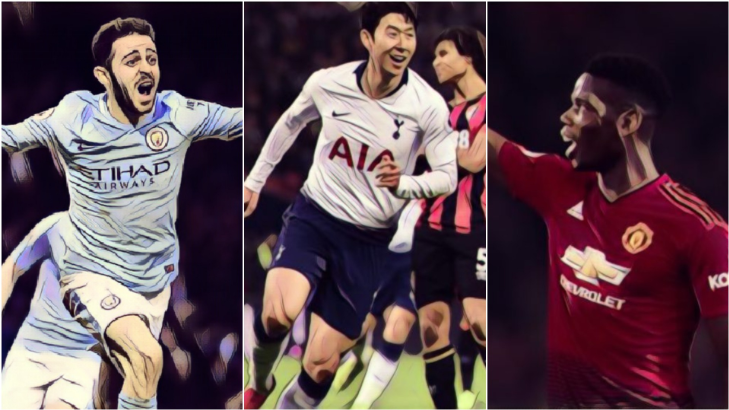 With Heung-Min Son away on international duty this month, which midfielders should Fantasy Premier League managers be looking at to replace him?

The Spurs attacker, who has been in blistering form in the Premier League in recent months, is currently representing South Korea at the Asian Cup. Here are five replacements every FPL user should consider for Gameweek 23:

A like-for-like transfer and, let’s be fair, the most obvious move if you have to offload Son.

Pogba is emblematic of the transformation Manchester United has gone through since José Mourinho was replaced by Ole Gunnar Solskjaer in December; the World Cup winner is playing quicker, looking happier and scoring more, as are his teammates.

By all metrics Pogba is a must-have weapon in your FPL armoury: looking at the last four gameweeks exclusively, the Frenchman has more goals (4) and FPL involvements (6) than any other midfielder, has 11 attempted assists, and three big chances to his name.

Only Mo Salah can compete with numbers that good, and while Eden Hazard’s underlying stats are very similar, his end product has not nearly been as impressive. A nice run of fixtures is a bonus too.

If you already have Pogba in your team, then there are a few good options, including Manchester City’s bearded midfielder.

The hairier Silva of the two, Bernardo has been more proactive in terms of end product recently in the absence of Kevin De Bruyne. In the last four gameweeks, the Portuguese has supplied a goal and two assists, 7 attempted assists and two big chances.

Man City are also on a bit of a tear at the moment with some good fixtures upcoming, although we’d like to see Silva make more attempts on goal; he has only had four shots of late, less than 41 other midfielders in that period. There is also the possibility of rotation in coming weeks, especially if De Bruyne finds his fitness soon.

The other concern when it comes to City players in general, is the fact that the Premier League champions are guaranteed to have a blank week as they have all but qualified for the League Cup final. It’s a risk, but one that could reap huge rewards.

If you want an absolute guarantee of game time, then look no further than this direct replacement. With Harry Kane, Lucas Moura and Son all out of action, Spurs will be depending on their Danish playmaker more than ever in the next few weeks.

Eriksen has three FPL involvements of late, with 9 attempted assists and 7 shots, although he has created zero big chances either.

If the price tag is out of range for you, then keep in mind no player has thrived more when Kane is out than Dele Alli. The midfielder has scored nine goals in the 23 league games that the England striker has either not started or missed altogether in the past five seasons. That’s more than any other Spurs player, including Eriksen (6) and Son (7).

While Alli has not been scoring as regularly as he has in previous seasons, there is the possibility that he will be on penalty duties, but that could go to Eriksen.

While it is a bit of a risk plumping for Spurs players while they are missing so many key elements, their upcoming fixtures look very tasty for points hungry FPL managers.

If you’re looking for a differential, or simply to free up some bank to afford Salah or Raheem Sterling, then Samir Nasri could be your man.

Although his career has been under a cloud of controversy since he was last playing football in England, the midfielder reminded everyone watching what he is still capable of by assisting the winning goal against his former side Arsenal.

While we don’t have a whole lot of evidence to go on, it was an impressive return nonetheless, the Frenchman making three attempted assists in his West Ham United debut. If you’re not convinced by Nasri, then go for Felipe Anderson (£7.3) who has been excellent this season.

The upcoming fixtures are by no means gimmes, but the Hammers will be going into the next month feeling confident of beating any team.

Bournemouth have taken a huge dip of late, winning just two of the last ten league games, but they arguably should have won away to Everton last week after hitting the post early on and dominating the first-half. They came away not scoring, but ended the game with 2.0 expected goals (xG), which suggests they’re not quite getting the rub of the green in front of goal despite creating good chances.

Ryan Fraser is at the centre of everything good the Cherries do going forward, proving five goals and nine assists this season. Although it’s dried up for the south coast side lately, the diminutive Scot has made 13 attempted assists in recent weeks, more than any other midfielder, and had six shots.

Unfortunately for Bournemouth that has only resulted in one goal and an assist from Fraser, illustrating just how important it is to have a clinical finisher on the end of those passes and why they value Callum Wilson quite so highly.

Although Fraser doesn’t have the form to warrant a transfer right now, his underlying stats and value for money mean he should be on your watchlist. Eventually Bournemouth will figure out how to score again, and while they have a mixed bag of fixtures in the near future, none of them are against unbreakable defences.

Unless stated otherwise all statistics mentioned are from the last four rounds of games and are provided by fantasyfootballfix.com