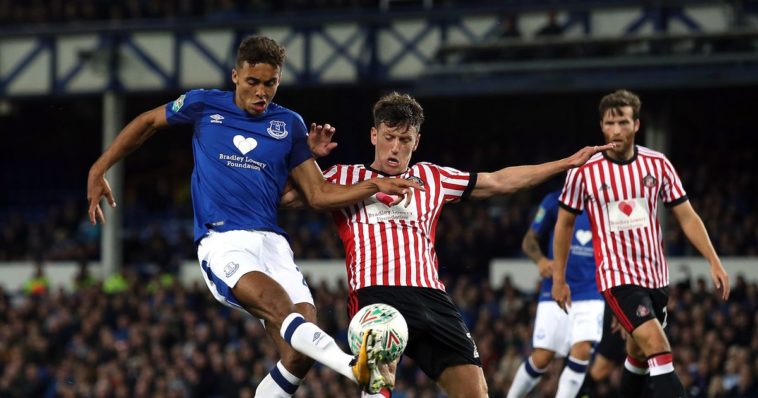 Sunderland traveled to Goodison Park for the League Cup third round this being the first time Simon Grayson’s men have faced a Premier League team since relegation last season.

Sunderland’s starting 11 had more Everton appearances than Everton’s starting 11. The Mackems starting squad included Jack Rodwell, Darron Gibson and Everton’s youngest ever scorer and the Premier League’s youngest ever scorer James Vaughan. Not only this, Bryan Oviedo another former Toffee started on the bench. Both teams wore shirts displaying the Bradley Lowery Foundation, Everton took great measures to help with Bradley’s fight and in his remembrance the teams wore his charity logo rather than normal shirt sponsors.

Sunderland made an abundance of changes, as did Ronald Koeman, Jason Steele started in the net for the visitors whilst Lynden Gooch, Donald Love and Darron Gibson as well as a return to the starting 11 for full back Billy Jones and midfielder Jack Rodwell. The Dutchman made a few changes to the side that were hammered 4-0 at Old Trafford on Sunday including, Maarten Stekelenberg, Mason Holgate, Davy Klaassen, Mo Besic, Sandro Ramirez, Jonjoe Kenny and Nikola Vlasic all coming in for the Toffees.

The first chance came early on for the home side and it dropped for former Hadjuk Split player Vlasic who rifled it into the side netting; Calvert-Lewin had beaten Billy Jones left after the ex West Brom man misjudged the flight and allowed the academy graduate to run at the defence.

Everton took control of the game quickly and didn’t allow much possession for the Black Cats. Right back Mason Holgate whipped in a cross, which the centre backs failed to clear, and consequently landing on the foot of Tom Davies who skied the resulting volley.

Spaniard Ramirez then tried to curl a free kick into the top corner but it was a comfortable catch for Steele.

Again causing danger down the right, Holgate rolled it to the edge of the area to Vlasic who knocked it through to Klaassen. The ex Ajax midfielder was then pushed off the ball but Calvert-Lewin was on hand to take over and roll a shot past Steele in his bottom left corner.

Not long into the second half, Calvert-Lewin was on hand to double the advantage when he was played in by Sandro Ramirez, after Love conceded possession to him. Shoddy defending by Grayson’s men allowed the ex Malaga forward to slip the ball to the youth academy graduate who powered the ball into the roof of Steele’s net at his near post, although no goalkeeper would’ve saved the shot. This ended a sublime piece of counter attacking play.

Shortly after this, the young Englishman could’ve completed his treble when Dutchman Davy Klaassen got away from Honeyman on the left and drove forward before whipping a ball in to meet the diving head of Calvert-Lewin, with only the woodwork denying him from a Carabao Cup hat trick.

Another great piece of football came from the Toffees when Mason Holgate launched a free kick from his own half to the left back Jonjoe Kenny, another Toffee academy player. Kenny played a one two with Croatian Nikola Vlasic, the Summer recruit, before the youngster crossed into the area finding the head of substitute Ademola Lookman, the former Charlton striker forcing a great double save from the Sunderland goalie Steele.

Sunderland got their first real half chance of the game when American Gooch crossed to find the head of the backpeddling James Vaughan. The former Everton player heading just wide of Stekelenberg’s goal, a decent effort considering he was feeding off scraps.

Seven minutes from time Everton did make it three after peppering the travellers’ goal, it came through out of favour striker Oumar Niasse, who’d replaced Calvert-Lewin. Davies picked him out after he peeled away from Kone and the Senegalese international rifled home into the top right corner past the goalkeeper.

The 400+ travelling fans saw another disappointment on the road despite the point at the KCOM Stadium on Saturday, Sunderland host Neil Warnock’s Championship high flyers Cardiff City on Saturday whereas Everton take on Eddie Howe’s AFC Bournemouth at Goodison on Saturday as well.

The Black Cats’ clash with the Bluebirds will be a make or break game with some fans starting to turn on Simon Grayson, although most back the former Preston gaffer; the same cannot be said for owner and chairman Ellis Short and CEO Martin Bain as the two are extemely disliked amongst the fanbase at the moment.