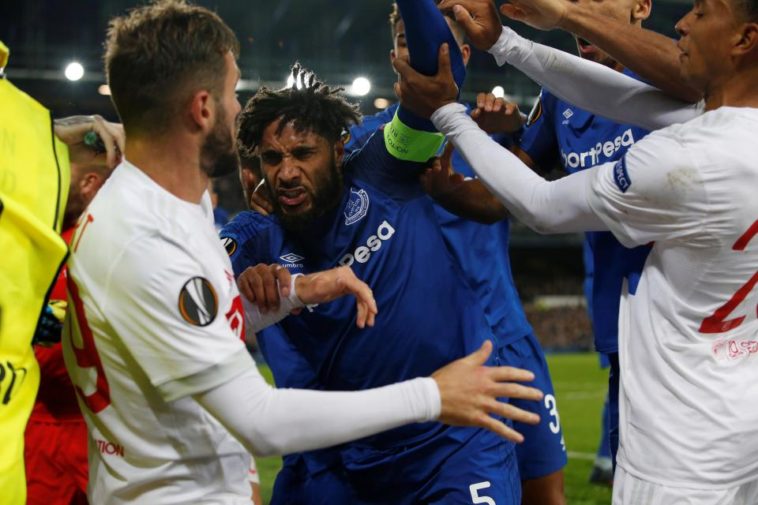 An improved second half performance wasn’t enough as Everton’s Europa League campaign has been left up in the air.

Everton’s kit colour will epitomise the feeling of every Evertonian, blue. Another poor first half display was countered by a revamped second half performance, but it wasn’t enough.

To say it was a first half to forget for Everton is a slight understatement. Five minutes in, an awfully timed tackle from Mason Holgate on Marcal inside the area resulted in a penalty; throwing Everton’s game plan out of the window.

Nabil Fekir stepped up and dispatched the penalty nicely to put the French team ahead. Lyon’s next best chance then came in the 37th minute when a Memphis Depay free-kick from around 30 yards or so hit Tom Davies and rattled the bar.

Then in the 41st minute another great chance for Lyon fell to Depay when he was slipped through to go one on one, luckily for Everton the finish wasn’t there and it was a comfortable save for Pickford.

As for Everton’s half, the blues first shot on target didn’t come until the 32nd minute when a lovely through ball from Davies fell to Mirallas who forced a good save from Lopes. Then later in the half in the 40th minute a poor pass from Filho fell to the feet of Klaassen but the out of form Dutchman failed to convert his shot from outside the edge of the box.

Everton started the second half firing when a Mason Holgate cross forced a save from Lopes straight from kick off and a Lookman shot from inside the area a minute later forced another good save from Lopes.

After a brawl broke out between fans and players alike, the atmosphere in Goodison picked up and Everton found their equaliser in the 69th minute. A peach of a ball from a Sigurdsson free-kick found an unmarked Ashley Williams who put the ball into the net. The following free-kick minutes later then hit the inside of the post.

Despite the improved performance, a mistake by Sandro in the 75th minute fell to Cornet who made a great run and picked out former Chelsea striker Bertrand Traore, who finished with a lovely back-heel despite the knock off Keane on the way.

The goal was a sucker punch and Everton’s only chance after that was a Calvert Lewin header in the 85th minute which forced a great save from Lopes to his left-hand side. Everton then could have gone 3-1 one down when a Lyon counter-attack was prevented when Ferri’s shot was saved.

The game was arguably a season defining one for Everton but despite their best efforts they could not turn around the result. The second half performance did paper over some cracks but there is an underlying problem at Everton at the moment. The penalty meant it was the 10th time in 11 games Everton have conceded first and the score line could easily have been higher if Lyon had their joint top scorer Diaz fit as the French team looked threatening on the counter. For Everton, the game; performance wise was better. But ultimately, not good enough.