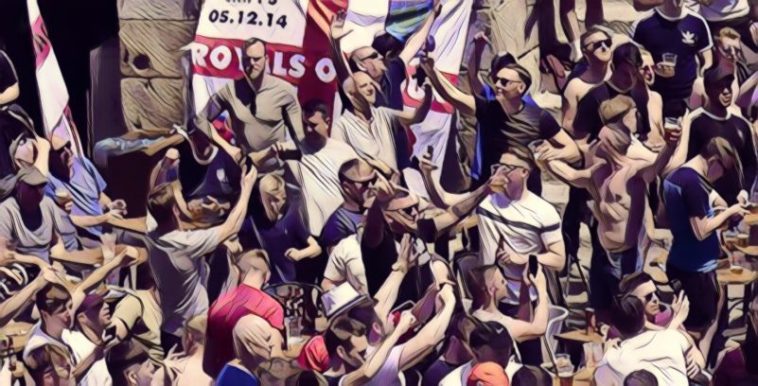 The FA have labelled England fans behaviour an ’embarrassment’ after trouble in Porto ahead of Gareth Southgate’s sides Nations League semi-final with the Netherlands.

Footage has emerged of England fans clashing with police in Portugal, the second night in succession that supporters have clashed with authorities.

Bottles were thrown at riot police who attempted to restore order as the Portugal v Switzerland semi-final was screened in the fan zone.

The incidents are a major disappointment as England attempt to win their first silverware since 1966, in scenes all too familiar from previous tournaments that will continue to harm the reputation of the Three Lions support.

The FA has moved to condemn the behaviour in a statement, saying any fans causing trouble are ‘not welcome in football’.

“The FA “strongly condemns the scenes witnessed in Porto overnight. Anyone responsible for these disturbances cannot be seen as true England supporters and are not welcome in football.

“They are an embarrassment to the team and the thousands of well-behaved fans who follow England in the right way,” An FA Spokesman said.

“We are liaising with the UK Football Policing Unit.”

Rumours that you need to follow a stringent ‘dickhead test’ in order to follow England away are so far unconfirmed.

England fans acting like dicks and immediately they are described as not being real fans. It’s so weird to me. Happens when fans racially abuse people too. As if it is impossible for real football fans to be a dickhead or racist. England is full of them, why pretend otherwise?

Significant story from @CrossyDailyStar when you consider the arguments 'it's only a minority' and 'the press blow it out of proportion'. This is a city shutting schools because England are playing there. Let that sink in. Makes you feel proud doesn't it….? https://t.co/H47EiQmDRA