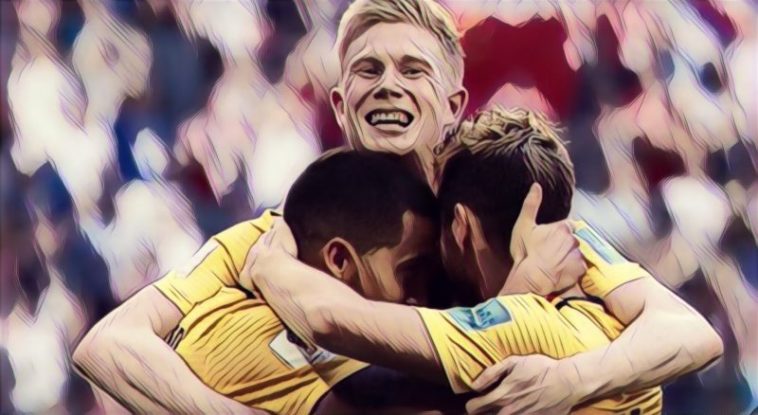 Roberto Martinez’s men just about shaded the game against Gareth Southgate’s men, in an encounter that understandably at times had the feel of a pre-season friendly.

Did not have much to do, although handled anything that came his way with calmness and composure, has cemented his place as one of the World’s best goalkeepers this summer.

Another classy defensive display by the Spurs man, which included a magnificent goal line clearance with the score at 1-0.

Aggressive in the tackle and tidy in possession, hard to know how he has managed to play three full games in a little over a week – considering his injury record.

Defended well, but was unable to get forward much after switching to left wing back.

Another superb display by arguably the tournament’s best right sided defender, showing a strikers instinct when he got in to open the scores early on. Belgium missed him badly against France in the semi-final.

Great cross for the opener and had looked threatening down the left, but had to go off just before half-time with a muscle injury.

Showed excellent distribution off either foot in the first period, but faded after the break.

Get’s through a lot of the dirty work in the centre of the park that gives his more talented team-mates the platform to burst forward and hurt the opposition.

Not quite at the level we are used to seeing in the Premier League for Manchester City, but still excellent.

Almost impossible to knock off the ball, and capped a superb World Cup with a clinical late finish.

Poor. Twice a woefully heavy touch denied him having a clear one-on-one. A disappointing end to a tournament that at times the Manchester United man has been excellent in.

Should have done better when in good attacking positions on a few occasions.

No chance with either goal and pulled off a couple of top saves, has had a brilliant World Cup all in all.

The usual. Did ok for the most part while still looking wholly uncoordinated, before being badly caught out for Hazard’s goal.

His critics will say that he should have smelled the danger and covered the near post for Belgium’s opener, and they would probably be right, but this was still another hugely encouraging display in both defence and possession by the young centre-back.

Strong in defence, excellent in possession and a constant danger from set pieces, just another day at the office for ’Slabhead.’ Sign him up Jose.

Looked one paced during the first period, but improved massively in the second-half, and was really unlucky not to score when his chipped finish was cleared off the line.

Another solid display and excellent set piece delivery, one of England’s stand off performers this summer, and it will be between him and Meunier for the right-back slot in the team of the tournament.

Has all the physical and technical attributes, but needs to add some tempo to his game, seems to think he’s still playing in a academy game and his team are 5-0 up at times.

Started in midfield and was one of England’s better players, switched to left-back at half-time and didn’t put a foot wrong.

Poor. Lost Meunier for the opener and the PSG star had him on toast until he was hooked at the break.

He is almost certain to finish at the Golden Boot winner and that is a truly outstanding achievement, but for the third game in a row he looked short of fitness and offered almost nothing.

His movement is superb, but it’s hard to shake the feeling that no matter how good a position he gets into, he’s never ultimately going to actually score. Taken off at the break.

Like all his other cameo’s this summer, he offered loads of energy but zero end product to back it up.

Much like Rashord really, although he can always point to that superb finish against the Panama.