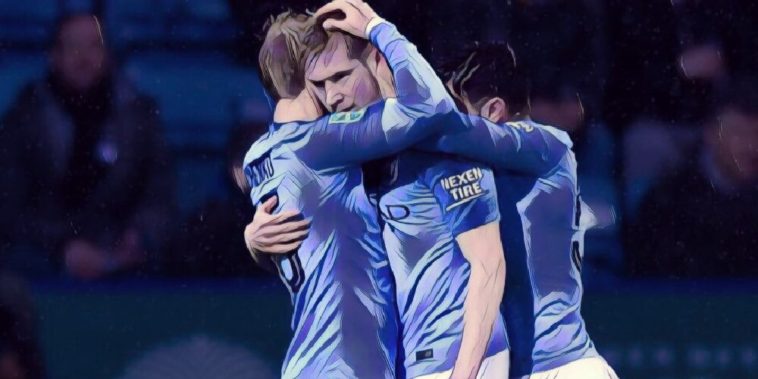 Kevin de Bruyne has said that Man City’s progress to the Carabao Cup semi-finals is a relief after the high flying Premier League champions were taken to penalties by Leicester City.

De Bruyne, making his first start of the season, got Manchester City ahead after just 14 minutes with a classy strike from outside the box, before Leicester‘s Mark Albrighton levelled the scores with 17 minutes left to play to take the game into extra time.

City would ultimately progress to the last four via a penalty shootout, and despite a Panenka miss from Raheem Sterling, City ‘keeper Arijanet Muric was the hero, saving two of Leicester’s four spot kicks.

Speaking after the game, Citizens goalscorer De Bruyne admitted that it was a difficult match:

“It’s a relief, it was difficult for us,” the Belgian told Sky Sports.

“It was a lot of players who hadn’t played a lot. We did a good game, it was an open game and in the end the keeper helped us. He’s got veins of ice! He did what he had to do in the shootout.

“It is difficult to start when you are injured for five months but it felt good to play for 70 minutes. It is a good sign for me.

“I feel stiff but I am happy to contribute. We want to win titles and now it’s two games more and we can battle for another trophy.”