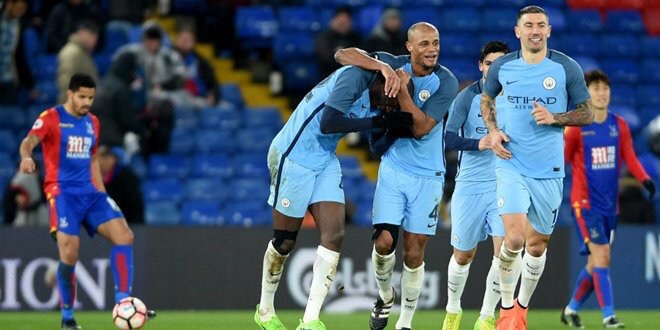 Manchester City cruised through to the fifth round of the FA Cup with a comfortable 3-0 win over last seasons FA Cup finalists, Crystal Palace.

Both Crystal Palace and Manchester City went into this game looking to reach the fifth round of the FA Cup for the second consecutive season.

However it was City who prevailed thanks to goals from Sterling, Sane and Yaya Toure who helped them to a convincing 3-0 victory over a poor Palace side.

City had the fair amount of possession at the beginning of the match and forced a good save from Wayne Hennessey. Yaya Toure’s accurate lobbed through ball found David Silva at the edge of the six yard box but was aimed straight at the extended arms of the goalkeeper. After this it was then Palace who looked to be in the driving seat.

A great run down the right hand side from Jordan Mutch drew a foul from Toure, who moments earlier was booked for another challenge, right in front of the assistant referee. On this occasion referee Mike Jones kept his cards in his pocket, to the home fans and Sam Allardyce’s disgust. Toure walked away with only conceding a free kick in a dangerous position just outside the penalty area, which led to nothing.

A few minutes later, another Palace free kick, by the half way line, was fired in deep by Chung Yong-Lee. Christian Benteke rose highest to win the header which fell to Mutch at the edge of the area. His scuffed shot deflected and led to a snap shot in front of goal from James Tomkin’s, which produced a great reflex save from stand in keeper Willy Caballero.

Just before half time, a pin point pass from Gabriel Jesus, marking his first City start, found Raheem Sterling who ran in on the oncoming keeper to slot City 1-0 up to the pleasure of  3,662 travelling away fans. Just before the interval, a City attack found Silva at the edge of the area, who then found Sterling and Jesus, with the latter’s shot stinging the hands of Hennessey, then cleared away by the Palace defence.

After the break, it was Palace who started brighter. A cross from captain for the day; Joel Ward, caused a miss kick from Silva. Mutch latched onto the loose ball and found half time substitute Loic Remy, unmarked 8 yards from goal, however his bicycle kick attempt flew over, wasting Palace’s best chance of the match so far.

Shortly afterwards, after the weather took a horrible turn, Silva latched onto a loose ball deep inside his own half, advanced forwards and found Leroy Sane who finished the game and Palace off.

Toure then scored a fine free kick to put the result beyond doubt to put Pep Guardiola’s men into the fifth round of the FA Cup.