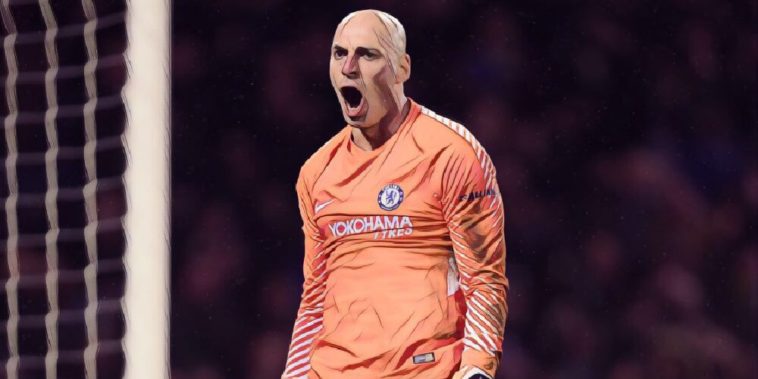 Chelsea outcast Willy Caballero has sent a clear message to Antonio Conte that he wants to start in the weekends FA Cup final.

Chelsea face Manchester United in the Wembley showpiece on Saturday afternoon as they look to salvage something from their disappointing season, after they finished five points behind Liverpool in the race for the top four.

While Thibaut Courtois is undoubtably the number one goalkeeper at Stamford Bridge, Caballero has been used as the clubs cup ‘keeper, playing in all five of the Blues FA Cup fixtures so far this season.

With the final looming, some have wondered if Conte will stick with his philosophy of playing Caballero in the FA Cup, or pick his strongest side by selecting Courtois.

However the 36-year-old former Man City stopper has said that while he respects the managers decision, whatever that may be, he wants to play:

“It’s the final, everyone wants to play, and I won the other cup [League Cup] with Man City, so hopefully God will be with us again and I can lift the cup with Chelsea,” said Caballero.

“I have played in every game. But, for the final, we will see. I have to train very well. But we will see what the starting XI is that Antonio chooses to play in the final and they have to be ready.

“It doesn’t have to be fair – it’s the decision of the boss. And I have to respect what he chooses for this game. There is not an agreement. As I say, when I started I knew that I would start in the cups. I always train so I am ready to play, I want to play.”