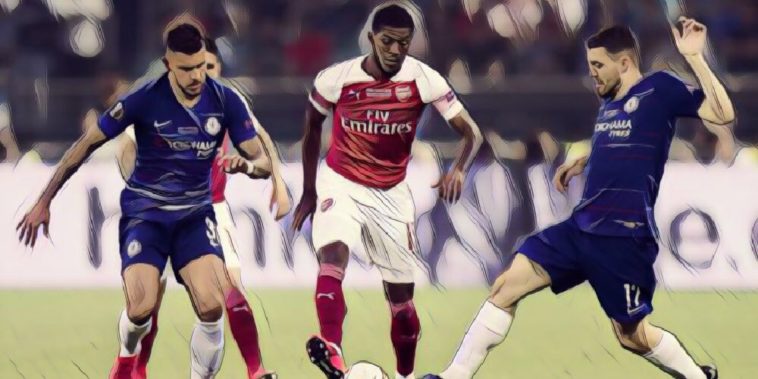 Another year, another trophy for Chelsea, as the Blues beat London rivals Arsenal 4-1 tonight in the Europa League final in Baku.

In what was truly a game of two halves, Arsenal had been the better team for much of the first period, although the teams went in at the break 0-0. Chelsea emerged as a different animal for the second period though, and blew the Gunners away with goals from Olivier Giroud, Pedro and a brace from Eden Hazard. Here’s how the players rated.

Very lucky to get away with some questionable handling decisions during the opening 45 minutes. Had no chance with Iwobi’s rocket, and he’ll be happy he isn’t the main talking point after this particular final.

Needed to make a few last-ditch challenges as Arsenal created acres of space out wide in the first half. Another consistent performance by the Blues skipper.

Hasn’t played much football so did really well to deal with the threat of the in-form Lacazette and Aubameyang.

A couple of crucial inventions when Chelsea were under the cosh early on, and played the ball out from the back with his usual aplomb.

A little ropey defensively, but good going forward, which pretty much describes every Brazilian full-back since records began.

Immense. It turns out a half fit Kante can still cover twice as much distance as a normal man. It was a case of full beast mode from N’Golo in Baku tonight.

Kept Chelsea ticking over in the centre of the park as usual.

It looked like it was going to be another game that passed him by, but the Croatian stepped it up after break, driving his side forward brilliantly from midfield.

Finished off Chelsea’s second nicely to collect the 427th major trophy of his career.

Superb. Opened the scoring with a beautiful trademark header, before laying on a delicate chip for Hazard to kill the game.

Two goals and an assist seems like a fitting way to sign off on what has been a marvellous seven-year stay at Stamford Bridge. The Premier League is about to lose one of, if not, its leading talent.

Entered the pitch with great energy and was unlucky not to get his name on the scoresheet.

Neat and tidy after his introduction and the England international will be delighted to get his hands on the first piece of silverware of his career.

Not the ideal way for the veteran ‘keeper to sign of a superb career, although he couldn’t be blamed for any of the goals against his former/new club.

Often tries to bully his opponents, although much like tonight it so often blows up in his face.

Hasn’t looked his usual assured self since his return from serious injury and Arsenal’s defensive leader fell apart badly during the second period.

Just not having Nacho as a third centre-back, gets exposed time and time again.

There is no dressing it up, the 21-year-old converted winger had an absolute mare in Baku. He looked off the pace from the get-go and was at fault for two goals.

This game summed up the Uruguayan’s season, started brightly but faded badly halfway through.

To be fair to the much-maligned Swiss international he looked to be bossing the midfield early on, spraying passes from left to right. However, he couldn’t live with Kante and Kovacic when they stepped up the tempo after the break.

A threat going forward, but no defensive discipline. It feels like I write the same sentence after every Gunners game.

Looked sharp during the opening exchanges, but like so many of his teammates, wilted as Chelsea put the squeeze on.

Arsenal’s player of the year put in another solid shift up top and will be gutted he never got the type of clear cut chance he craved.

Not the best of nights for the Gabonese strike. His touch looked a bit sloppy and he thrashed at the couple of half-chances that came his way.

Tried to regain some control for Arsenal in midfield, failed to do so, however.

Burst into action with a marauding run and a cracking volley that flew into the top bin, which gave the Gunners brief hope of staging a comeback.

Bright after coming on, but missed a guilt edge chance in the 82nd minute, that would have at least made things interesting.