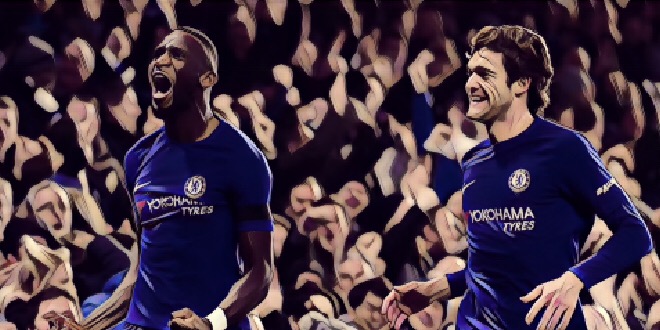 Chance after chance was stopped, but Antonio Rüdiger’s header in the 55th minute earned Chelsea a 1-0 win against Swansea City at Stamford Bridge on Wednesday.

Chelsea had 21 total shots, with 10 on target, but the German defender’s goal was enough to earn three points for the West London club to keep up with the Manchester clubs at the top of the table.

Here are five things we learned from Chelsea vs. Swansea City.

Game plan is to go wide and cross

With Swansea playing in a narrow 4-4-2 diamond formation, acres of space in the wide areas were exploited by Chelsea.

Fullbacks were tucked in to prevent the forward trio of Willian, Pedro, and Álvaro Morata from going through the middle. This meant a lot of space for Marcos Alonso and Davide Zappacosta to receive the ball in dangerous positions.

This also meant that Chelsea focused on crossing the ball, and hoping for a teammate to make a good connection with a header. Unfortunately, the majority of them ended in a clearance or block. Wide cross, clear, rinse, repeat. 15 corner kicks and 39 clearances really slowed the tempo of the match.

The game plan eventually worked when N’Golo Kanté had his shot from a corner kick deflected right into the path of Rüdiger who smashed a header into the ground and past Lukasz Fabianski. Chelsea did their best with what Swansea presented to them.

If Chelsea fans were frustrated by a lack of finishing on multiple chances, Swansea fans must’ve been screaming in agony for not even creating any chances.

The Welsh club did not get their first shot in the match until the 66th minute, and finished with two shots that weren’t on target. Swansea still sit at seven goals scored for the season after 14 games, the lowest total in the Premier League.

It didn’t help that most of their goals this season were scored by Chelsea loanee Tammy Abraham. He was unable to play against his parent club. It also didn’t help that Renato Sanches, on loan from Bayern Munich, constantly turned the ball over to warrant his substitution to start the second half.

What's wrong with you. Tell us your story pic.twitter.com/CaoNVtRziG

If Swansea City want to save themselves from relegation, the first step will be to start scoring more goals (my inner voice is yelling at myself, “No s**t, Sherlock!”). However, they’re not too far off as 11th place Southampton who are only six points ahead.

No rest for the weary

Fitness will be important for Chelsea as they embark on a journey of 11 games from now until January 3.

César Azpilicueta didn’t start a Premier League match for the first time in 74 fixtures. It was also the first time Antonio Conte didn’t select the defender to start after playing every minute of Conte’s Premier League career. Eden Hazard was also rested until he was substituted into the match in the 80th minute.

The Blues will only have three or four days of rest between games until the new year. Fortunately, Victor Moses returned from a hamstring injury that caused him to miss nine games. The depth he brings to the right wingback position will certainly be appreciated.

Meanwhile, Michy Batshuayi is still injured, leaving Morata as the only healthy striker outside of academy players. It will be a tough run of games for Chelsea. Luckily, only four of the matches are away from Stamford Bridge. Hopefully they can survive this gauntlet of games to come out stronger than ever.

Ignored fouls, missed penalty shouts, and losing control of the players- Match Referee Neil Swarbrick had a bad game that the FA will probably conveniently disregard.

Alonso was bowled over by Sanches in the 26th minute, and Swarbrick concluded that Sanches got the ball, which he did. However, he got the ball by running through the Spanish wingback, and something should have been called.

It got to a point that Swarbrick was subjected to Conte’s wrath for fudging another call, and the Italian was sent to the stands. And even in the seats of the East Stand, the verbal dressing down continued until Conte was forced to watch the rest of the match from his office.

You could see the way Chelsea players were interacting with Swarbrick throughout the rest of the match. There was a lot of arguing stemming from more missed calls.

Swarbrick needs to not officiate a match in a stubborn manner. Instead, he should focus on just being competent.

Despite frustrations, no points dropped

This game was a slow grind, and it wasn’t fun to watch or play.

Swansea, for the most part, did well in stopping Chelsea from finishing their chances. The Blues put a lot of effort into winning the game, but were only able to get one goal.

However, only one goal was needed, and these grinding efforts are a needed quality for potential champions. Manchester City had a similar effort where Raheem Sterling finally earned the win and three points for them in the final minute of added time against Southampton.

It will be hard to catch up to City to take first in the Premier League, but earning three points in this type of games will keep you in the running, even if the pace of the match had me yawning.