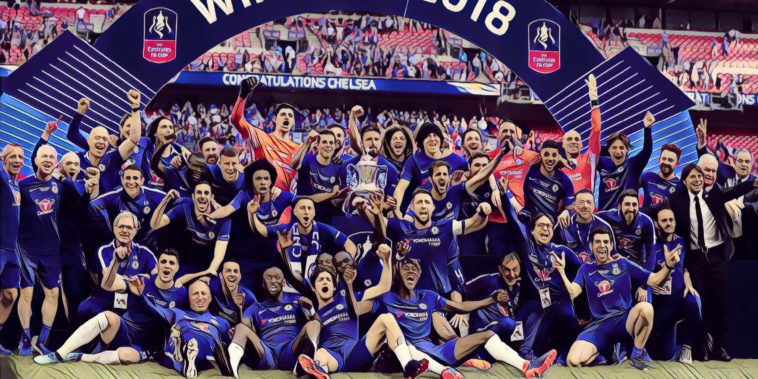 Eden Hazard calmly dispatched a first half penalty to give Chelsea the win, and the FA Cup.

It was a game of few chances, decided by Phil Jones’ grievous mistake midway through the first half. Caught out by a wonderful pass from Cesc Fabregas, Jones was always struggling to get back. In his desperation he hauled down Eden Hazard for a clear penalty. The Belgian playmaker dusted himself off, and sent David de Gea the wrong way from the spot. The rest of the game saw Chelsea largely camped inside their own half, but United were unable to break them down.

Marcus Rashford, largely shackled, managed to break past the defence on one occasion in the second half, but saw his chip parried by Thibault Courtois. Paul Pogba had a golden chance from a corner, but headed wide. It summed up United’s day, and they could only stand and watch as Chelsea jubilantly lifted the 2018 FA Cup.

A glorious farewell for Hazard?

This game could give Hazard the perfect send-off. With no Champions League next season, Chelsea face a tough ask when it comes to hanging on to the mercurial playmaker. He is an instrumental part of their forward line, and his loss would be a hammer blow to their hopes of re-entering the top four of the Premier League. With the World Cup on the horizon, Hazard has said that he is not making a decision on his future immediately.

Real Madrid have been circling for a while now, and the chance to play at the highest level is now in front of Hazard. If he does decide to move on, Chelsea can look back on his time at the club fondly. He will have given the fans one last glorious, trophy-laden day.

Should United fans question the methods?

This whole season, it has felt like United’s expensively assembled squad have been playing within themselves. The attack, imbued with the talent of Romelu Lukaku, Alexis Sanchez, Marcus Rashford, Anthony Martial, Jesse Lingard and Paul Pogba, has too often appeared slow and laboured. Mourinho has been accused of being too defensive, relying on a centre-back pairing of Chris Smalling and Phil Jones, neither of whom can be described as elite-level players.

In the end, Mourinho’s football, pragmatic though it may be, always produced results. That has not been the case this season though.

Manchester City cantered to the league title, setting records along the way. They were bested by a dismal Chelsea side in the FA Cup final. Liverpool have reached the Champions League final while United were dumped out by Sevilla.

Mourinho is not getting results, and the fans now have the right to question the process.

United fans probably knew that they were in for a long day when they saw Romelu Lukaku was only fit enough to make the substitutes bench. Despite all the criticism he has faced, the Belgian forward has had a good season, and provides a focal point for United’s attack.

Without him, they looked toothless up front. There was no one there to bully Gary Cahill in the air, no presence to hold up the ball. Marcus Rashford had a poor day on the ball, and found himself blocked out of the game by the sheer numbers that Chelsea put between him and the net. Lukaku does not need to burst into the space behind defenders to influence the game. His presence draws defenders in, creating space for the likes of Rashford and Alexis Sanchez. It is an easy crutch to lean on, but Lukaku’s fitness tipped the balance of the game.

As the combustible Italian paraded the FA Cup around Wembley, having overcome his nemesis in Mourinho, there was a sense that this may be the last time he will be seen in Chelsea colours. His long-standing battles with Chelsea’s transfer committee are well documented; his disdain for their dealings have been evident.

This season has been one of frustration. Chelsea have struggled to find form, succumbing at vital points in the season. In spite of that, they have ended it will some silverware. If he does decide to leave, he will be in high demand, particularly back in Italy. Conte’s time at Chelsea deserves to be remembered for his Premier League winners, who played with panache and adventure, and his popularisation of three-at-the-back formation in the Premier League.

Martial did not deserve to be named in the France squad

As Didier Deschamps announced his squad for the World Cup, there were always going to be notable omissions. One of those left out was Anthony Martial. The Frenchman has endured a tough second half of the season. His loss of form, coupled with the high-profile arrival of Alexis Sanchez, has seen him drop down the pecking order. When he has come on, his decision-making has been lacking. This was evident again in the Final, where he managed to dribble himself into a good position, before producing a nothing cross, which ended on the roof of Courtois’ net.

Wherever he is next season, his composure is something he needs to work on. Martial is one of the most talented young players in football today. With clearer decision-making, he can make himself undroppable for club and country.