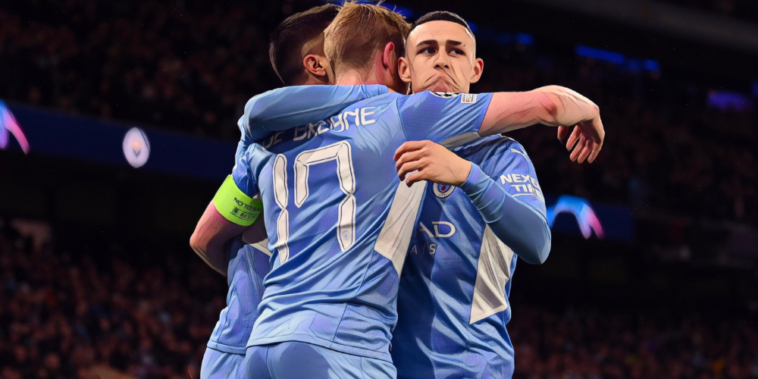 Pep Guardiola came up against his footballing antithesis as Atletico Madrid arrived at the Etihad this week, the Spanish side no strangers to the dark arts and taking pride in spoiling spectacles.

Diego Simeone’s side were full of the defensive discipline that has defined their game across the past decade, two deep lines frustrating Manchester City for much of the contest.

The tightest of games had appeared to be heading towards a favourable goalless conclusion for Atletico, before Phil Foden came off the bench to hand the home side a crucial advantage.

It took less than 80 seconds for Foden to create the match-winning moment, his close control attracting a group of Atletico defenders before finding a perfect pass between the legs of Reinildo to free Kevin De Bruyne for the game’s only goal.

Foden’s intervention was both timely and vital, the 21-year-old coming to the fore when his side needed it most.

No prizes for guessing this selection, following another masterclass from the quite brilliant Karim Benzema.

Benzema has long been an elite talent, but his game has benefitted from the lead status he has commanded at Real Madrid since Cristiano Ronaldo’s departure.

There is now a strong argument that the 34-year-old is the most influential footballer in the game, a complete centre-forward who has married a career-best season in front of goal with cute approach play and combinations.

What a feeling… a great first round for the team 🔥
See you 𝗮𝘁 𝗵𝗼𝗺𝗲 for the final result… 💥#Nueve #UCL #HalaMadrid #Alhamdulilah 🤲🏼❤️ pic.twitter.com/rTaE3Ceusd

Benzema scored a stunning hat-trick as Real Madrid won 3-1 at Chelsea on Wednesday evening, moving to 37 goals for the season in all competitions and becoming just the fourth player to score consecutive Champions League hat-tricks.

His first two goals were headers of outrageous quality, the first an audacious effort after meeting Vinicius Junior’s cross before caressing a second past Edouard Mendy for his second.

In between, there were Zidane-esque moments of close control under pressure, with Chelsea unable to pick up the intelligent movement of a footballer already compiling quite the case for the 2022 Ballon d’Or.

Take your pick from Karim Benzema’s first-half brace at Chelsea, two headers of the very highest quality from the France international.

His first, however, was something truly out of the ordinary.

A sharp one-two with Vinicius Junior was followed with a burst forward to meet the Brazilian’s cross, as Benzema powered home the opening goal of the game from just inside the area.

He had no right to score that! Ridiculous header 💥#UCL pic.twitter.com/jWtW2l1kcZ

Chelsea know better than most the talents of Thibaut Courtois, with the Belgium international having spent four seasons as the west London side’s number one.

Courtois – who won two Premier League titles with Chelsea – was booed on his return to Stamford Bridge, but had the last laugh as Real Madrid secured a first leg advantage.

The 29-year-old produced an exceptional save to ensure Real’s lead remained at two goals ahead of the return leg, diving full length to tip away a fierce drive from former teammate Cesar Azpilicueta.

Thibaut Courtois back at Stamford Bridge pulling off worldie saves! 🧤❌

That one could be vital in the tie… #UCL pic.twitter.com/HiD5rxAMrp

Villarreal battled to beat Bayern Munich at El Madrigal this week, with the Yellow Submarine well worth their 1-0 win in Spain.

Unai Emery’s side were regarded as firm outsiders ahead of the quarter-finals and in Bayern faced one of the favourites to win the Champions League this season.

The Spanish side produced a display full of determined defending and energy to give themselves a lead to protect in Munich, their clean sheet ending Bayern’s run of having scored in 30 consecutive Champions League games.

0 – Villarreal are the first side to keep a clean sheet against Bayern Munich in the UEFA Champions League since Liverpool in February 2019, ending a run of 30 consecutive games in which the German side had netted at least once. Masterclass. pic.twitter.com/vVOYch4ewC

Defeat was also Bayern’s first in an away Champions League fixture since losing 3-0 at Paris Saint-Germain in September 2017.

Kevin De Bruyne was less than impressed with Atletico Madrid’s negative tactics at the Etihad, criticising the Spanish side’s lack of ambition at Manchester City.

Despite admitting most sides set up to frustrate City, De Bruyne conceded that Atletico’s defensive tactics reached an entire new level this week.

Chelsea had been second best throughout in the first half of their defeat to Real Madrid, but a Kai Havertz header had given the west Londoners a lifeline just before the break.

Just seconds into the second half, however, it was 3-1 to the visitors after a calamitous defensive mix-up. Edouard Mendy sold Antonio Rudiger short with a woeful pass, allowing Karim Benzema to nip in and steal his hat-trick.

The worst possible start to the second half for Chelsea… 😔

A terrible defensive mix up between Édouard Mendy and Antonio Rüdiger allows a tap in for Real Madrid's star man ⚽️#UCL pic.twitter.com/GJDtp3IM6u

Rudiger’s challenge was poor and unconvincing, but Mendy’s basic error was a nightmare moment for the goalkeeper and leaves the holders staring down the barrel of a Champions League exit.