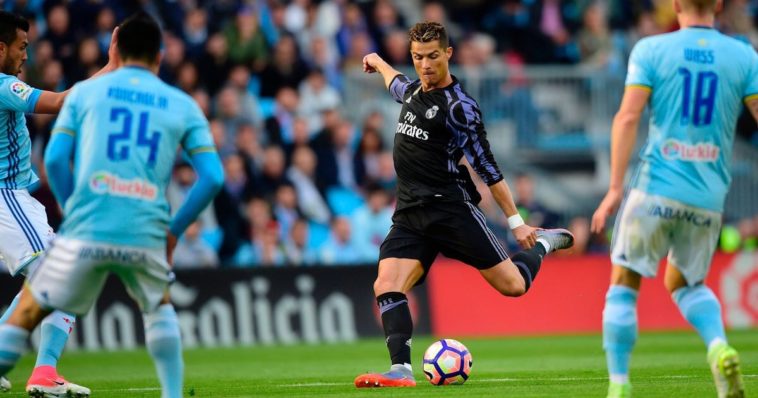 Goals from Ronaldo, Benzema and Kroos keep Real Madrid on course to win their first La Liga title in five years. A well-deserved but hard-fought victory over Celta means Real now need just one point from their last game to win the league.

Los Blancos had waited for three months to play against Celta Vigo after a storm had torn through the Celta stadium. Their wait was over on Wednesday though, and it’s safe to say the result was worth the wait.

The game was hot-headed and ugly at times, with many mini-fights kicking off in game. Until Karim Benzema scored the third for Real, it seemed as if Celta could achieve a comeback.

Cristiano Ronaldo smashed a shot through the legs of Gustavo Cabral, past Alvarez to put Real ahead in the game, and ahead of Barcelona in the points table.

An Iago Aspas driven Celta side was eager to get back in the game. Keylor Navas put in another good performance, pushing over Daniel Wass’ free-kick. The Spaniard had a flurry of efforts, being denied somehow.

After fluffing his lines in the Europa League fixture against Man Utd, John Guidetti had a sub-par game, failing to control the ball and failing to finish numerous times.

No Real Madrid game is complete without a controversial incident, and this game was no exception. Celta wanted a penalty when Raphael Varane appeared to handle the ball. The contact was clear but it was outside the box. The situation led to nothing but an Iago Aspas yellow card.

Just three minutes into the second half, a sloppy Guidetti misjudged the ball from six yards out, leading to a swift Real Madrid counter-attack and eventually a goal. Cristiano Ronaldo did what he does best, scoring goals.

Celta were still persistent to get a goal back but things soon got harder for them. Sergio Ramos ran into the back of Iago Aspas, who made the most of the incident; despite wanting a penalty, Iago got himself a second yellow. John Guidetti eventually scored from a heavily deflected shot, the game looked alive once again.

A card happy referee sent Celta de Vigo’s assistant manager to the stands, while dishing more cards to players of both sides. Amidst all this chaos, Karim Benzema tapped in from a Marcelo pass. Ronaldo inexplicably missed an open goal from a yard, it didn’t matter though, as Toni Kroos scored his second in as many games.

The season is more or less over for Celta, who are in 13th and have been knocked out of the Europa League, effectively ruling them out of Europe next season. As for Los Blancos, they are still in pole position to win the La Liga, needing just a point out of their last game against Malaga to secure the title. There will be no second chances for neither Real or Barca, a small mistake might hand the title to their most dearest of rivals.