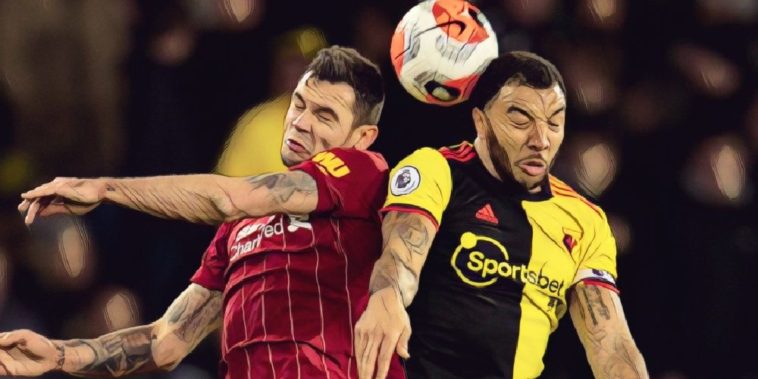 Jamie Carragher has slammed Dejan Lovren for constantly making ‘the same mistake’ at Liverpool and says the defender ‘wants to fight everyone he plays against’.

The Croatian international has often proved a maligned figure during his time on Merseyside and was largely criticised for his role in Liverpool‘s defeat at Watford last month, struggling during the 3-0 loss at Vicarage Road as the club’s unbeaten run in the Premier League ended in comprehensive fashion.

Following that defeat, Hornets’ captain Troy Deeney admitted to targeting Lovren as he knew the centre-back would want to get involved in a physical contest, a situation which Carragher says proves the defender has failed to learn from past mistakes.

“I’ve watched Lovren in a Liverpool shirt for so long making the same mistake,” he told the Maych X Pajak Podcast. “He wants to fight everyone he plays against.

“Harry Kane started this season and stands on Lovren, just uses his body and knocks him out the way. He’s 28, he should have learnt by now. There’s no problem letting Deeney bring the ball down.”

Lovren’s future at Anfield remains uncertain after falling behind both Joe Gomez and Joel Matip in the pecking order to partner Virgil van Dijk, and speculation has increased he could depart at the end of the campaign.

Arsenal and Tottenham have both been tentatively linked with a move to sign the Croatian, who has made 184 appearances in all competitions since arriving from Southampton six years ago.