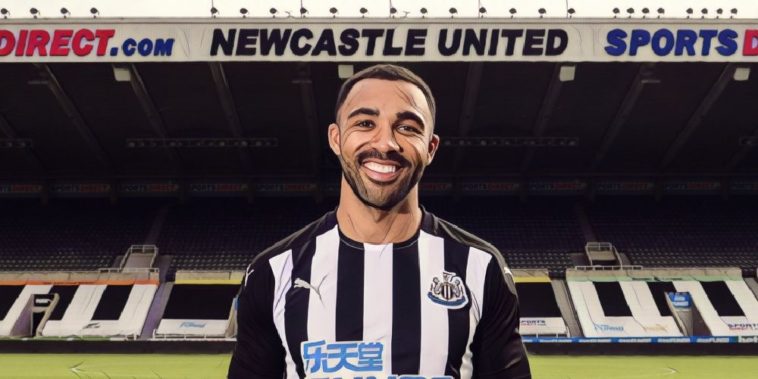 New Newcastle United signing Callum Wilson has revealed that the St James’ Park atmosphere and the quality of his new teammates helped him come to the decision to join the Magpies, despite interest from elsewhere.

The England international made the £20m move to St James’ Park this week from recently relegated Bournemouth, the striker having impressed during his time at the Vitality Stadium.

The 28-year-old spent six years with the Cherries under former manager Eddie Howe, scoring 67 league goals in 187 appearances for the club and gaining international recognition.

The former Coventry City forward did have other parties interested in his signature, although he revealed that the pull of playing for such a ‘massive club’ like Newcastle – and in front of such a raucous atmosphere – was simply too good an offer to turn down.

“Yes, from my experience it is one of the loudest,” Wilson told the Telegraph. “It stood out in my head. I remember playing for Bournemouth, a goal we conceded, a header I think, in front of the big stand. I was standing there thinking blimey, this is a real stadium. It stuck in my mind.

“I felt it was a sleeping giant, it’s such a massive club, the stadium and the fans up here. I’ve only experienced it as an outsider playing against Newcastle.

“As a striker you are always at the top of the pitch when play is going on in and around your own box, so for me playing up here at St James’ Park and hearing the noise when Newcastle have scored against us, it’s the passion, you see the fans going crazy and it just fills you with energy.

Very excited for this next chapter of my career at such a big club! @NUFC pic.twitter.com/WNGyy5gL5i

“I just thought, that could be me scoring that goal and it fills you with confidence and excitement. As a footballer that is what you want, as a striker you want to feed off that energy, that’s what it is all about. That was definitely a big part of my decision.”

Wilson’s decision to join Newcastle came following interest from Aston Villa, the Midlands club also lodging a similar bid for the player and were offering similar wages as their Premier League rivals.

However, having weighed up his options, the striker admitted that he was excited at the prospect of playing alongside Newcastle’s creative players, and following in the footsteps of some of the club’s goalscoring greats.

“When you find out teams are interested in you weigh up the options,” he added. “I looked at squads at the clubs, I looked at who was here and what style of football they play and what will suit me more.

“Last season, I didn’t have a great season and I was disappointed with how the season panned out for myself and the team. For me, it was about getting back to my best and to find the best club to do that.

“The style they play at Newcastle, analysing the players that are here, playing against them. You can watch players on telly but getting a feel for what they are like on the pitch, when they are playing against them, you know there is real quality here, some really quality individuals.

“I just feel like, having those players around me, Allan Saint-Maximin, [Miguel] Almiron, [Jonjo] Shelvey and Isaac Hayden, there are some great players here.

🏴󠁧󠁢󠁥󠁮󠁧󠁿 Most @premierleague goals by Englishmen since August 2015

“If we gel as a team, this is a club that is going to go places. I just thought it was the right mix for me as a striker, playing alongside Joelinton, it’s only going to benefit myself. I felt I would get opportunities to score and it was the right fit for me. We shall soon see if it is the right decision.

“It’s exciting, if you look historically, strikers have done well at this club and I want to be part of that. Look at the names they have had here in the past, [Les] Ferdinand, [Alan] Shearer. If you get off to a good start, you score goals, you work hard, the fans will be on your side and that’s all you can ask for.

“They obviously demand the highest from their strikers and I thrive off that. I’m looking forward to giving my all for the club.”

Newcastle fans will hope that their new number 13 will help pep up an attack that mustered just 38 league goals last term, the Magpies getting their season underway with an away trip to face West Ham on Saturday evening.