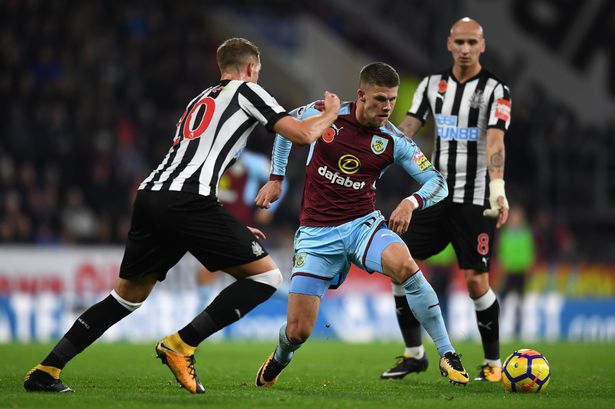 Monday Night Football saw Burnley pick up a narrow win on Sean Dyche’s five-year anniversary as Clarets boss. A second-half goal from Jeff Hendrick was enough to seal the win in a tight game against Newcastle United.

The score line was relatively predictable and no one was expecting a goal-fest. However, here is five things we learned from the game.

1. They’re similar teams, However, neither look like relegation candidates

The one thing that was evident within five minutes last night was that Dyche and Rafael Benitez have similar philosophy’s. Both want to be hard to beat.

When you compare both sides to the likes of West Ham and Swansea City, their squad looks weaker. However, on the pitch both sides have the desire and passion to stay ahead of The Swans and The Hammers this season.

Once again, a Newcastle player made a mistake and it cost them a goal. This has been a consistent fault of The Magpies this season.

Burnley’s pressing game had a big part in those mistakes and they need to be credited for that but Benitez will need to take out the mistakes to avoid a relegation battle this year.

3. If Sean Dyche leaves, Burnley are in a great place

When you saw the banners up in Turf Moor you realised how much Burnley fans idolise Sean Dyche and rightly so.

Dyche has turned Burnley into a solid Premier League team and lifted the spirits of all Burnley fans. They’ve got one of the best defences in the League for me and with Chris Wood, Sam Vokes and Ashley Barnes as their forward options, they’ve got goalscorers to win then tight games.

One shining spark for Newcastle this season has been Mikel Merino, the Spaniard was out of Monday’s game, and although Mo Diame didn’t have a bad game, they missed Merino and struggled to get a hold on the ball against a determined Burnley side.

5. Newcastle need another creator or striker and quickly

Once again the combination of Ayoze Perez and Joselu hasn’t worked for Newcastle.

Neither had any effect on the game yesterday and Burnley’s defenders handled them with ease. Both are talented players on their day but they simply don’t need mix well. If Newcastle fail to improve their attacking line, their defence will have a lot of work this year.