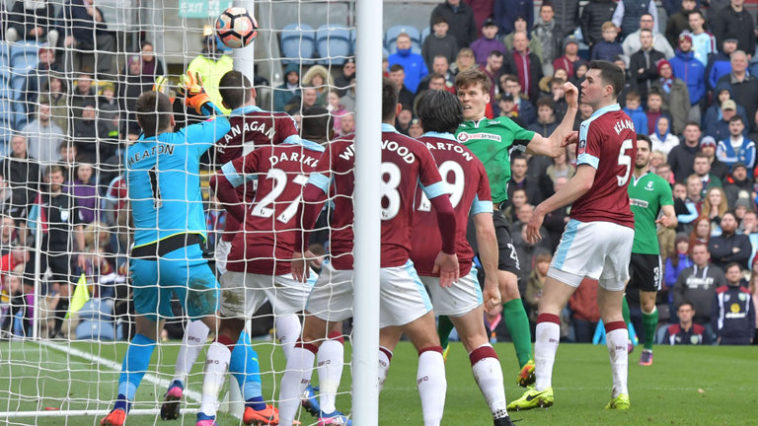 Burnley fell to an embarrassing defeat to National League side, Lincoln City, which sends the Imps into the quarter finals. The first time a non league side has reached the last eight since 1914.

The Clarets were outfought and outthought for the entirety of the game and on the day, Lincoln were deserved winners.

It was the Imps who had the first golden opportunity of the game, when a poor clearance from Tom Heaton fell to a green shirt, who headed on to Nathan Arnold, who’s ball into the box was blasted over the bar by jack Muldoon; a great chance wasted.

Andre Gray then came close for Burnley after he was played in on goal by Joey Barton, but his tame left footed effort was easy to gather for Paul Farman.

It was then Barton’s turn to test the Lincoln stopper. His volley from the edge of the area stung the palms of Farman but again, it was easier gather for the ‘keeper.

Towards the end of the first half, Burnley were the team in the ascendancy and were presented with a golden opportunity, which fell to Scott Arfield. After some neat play in the box by James Tarkowski, he laid the ball off to the Canadian, who wasted a glorious chance.

Another chance fell to the Clarets after the break. Barton swung a free kick in and Gray found himself unmarked six yards from goal, but his right footed effort was awful and he couldn’t even get the shot on target.

Mr Controversy, Joey Barton was again at the centre of controversy after falling to the deck when he was struck, accidentally, by Matt Rhead, who caused the Burnley defence problems all day long.

Barton was again involved moments later after he appeared to swipe out at an opponent but he only saw yellow.

The game was decided on 89 minutes, when Sean Ragget managed to scramble the ball over the line to cue delirious scenes in the Turf Moor away end.

A deep corner was headed back across goal and it fell nicely for Raggett, who’s header was a yard over the line, and with goal line technology in order at Turf Moor, Graham Scott had no hesitation is pointing back to the middle.

Andre Gray had one last chance for Burnley late on, but his left footed effort was blocked by the legs of Farman, and with that went Burnley’s hopes of making the quarter finals.

For Burnley, it must be said, the defeat is embarrassing. From start to finish, the performance from Burnley was dire and on the day the deserved to go out.

However, all credit goes to Lincoln, they came and delivered a performance that Burnley have delivered to so many other teams, to give the Clarets a taste of their own medicine.

The Imps were fantastic on the day, they defended resolutely and were there to finish their chance when it came. Fair play to them for that and best of luck in the next round! You deserved it!