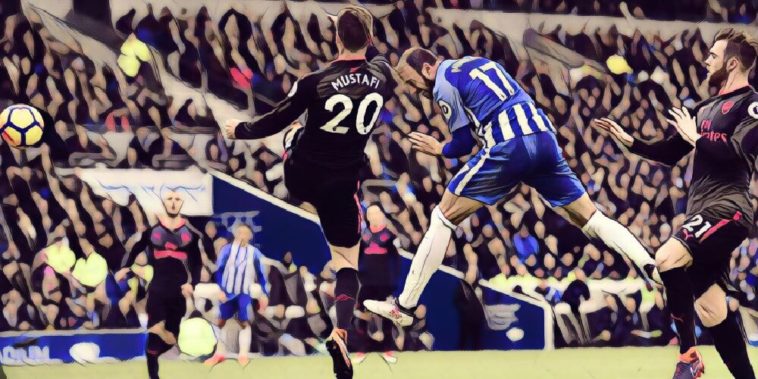 Brighton got a well deserved victory against the once mighty Arsenal to see themselves climb back into the top half of the Premier League table. Here are five things we learned from the game.

Arsenal lost their fourth consecutive game in all competitions and suffered a fifth defeat in six games as they saw themselves helpless at The Amex. The Gunners have been in very poor form and have shown no signs of what Arsenal are known for in the last few months.

Arsenal have lacked the fluidity and sharpness in their game for quite a time now and yesterday was nothing different from that. Goals have been hard to come for Arsenal who have shown little or no dominance against any opponent recently.

New signing Pierre Emerick Aubameyang did score a goal but by then the damage had already been done. Top four hopes are all but over for Arsenal with this dip in form.

Petr Cech has been waiting to get his milestone 200th clean sheet  since December. And the way Arsenal and Cech himself have been performing now, it looks like he might have to work for the next clean sheet harder than he would have thought. Petr Cech has made some really bad errors this season which have costed Arsenal valuable points and games.

The legendary goalkeeper has been nowhere near his best and needs to do much more better. It would not be an overstatement to say that any other goalkeeper yesterday and Arsenal probably would not have lost the game against Brighton. That being said, doesn’t take any blame away from  the manager and the remaining ten players. Who were all equally bad.

Arsenal manager Arsene Wenger rested key players in Aaron Ramsey, Hector Bellerin and Nacho Monreal against Brighton ahead of their Europa League game against Milan at San Siro. The rest given to players resulted in an embarassing loss to Brighton as the players coming in could not do the job for the Gunners.

Wenger did a similar thing against Östersund where he rested the main team who were supposed to play Manchester City next. Arsenal ended up losing both the games against Östersunds and City. And looking at Arsenal’s form, I wouldn’t be surprised if Arsenal get to a similar situation and get thrashed by Milan now.

Brighton on the way up

It has been a great season for newly promoted Brighton. The Seagulls sit comfortably at tenth in the Premier League Table, just three points behind eighth placed Leicester City. For a club that begun the season with only the hopes of surviving in their first season, Brighton have done incredibly well. The fans will be very happy with the performance of their club.

The likes of Pascal Gross, Matt Ryan, Lewis Dunk and Glenn Murray, have performed well and have stepped up at crucial moments in the season. The future looks bright for Brighton, who look comfortable to stay in the top flight and start building a foundation for the coming seasons.

When is enough, enough for Mr. Wenger?

Arsenal are on course to finish what will be a disappointing Premier League campaign sitting sixth in the table, with the top five teams performing much much better than the Gunners. There have been calls for manager Arsene Wenger to step down at the end of the season. However, the loss against Brighton just angered Arsenal fans a bit too much, the majority of whom want him to step down right away. There have been talks about Wenger being given time until the first leg against Milan and his future will be decided then by the Board.

Wenger signed a two year extension only last summer wanting to better last season’s performance. But his team have not improved from last season. In fact, if anything, Wenger’s men look to have fallen two steps backwards than where they were last season.

Amidst this news of this being Wenger’s last season breaking out, Joachim Löw is the name shortlisted by the Arsenal Board. So will Arsenal sack Wenger? Or will he step down? We will have to wait to find that out.