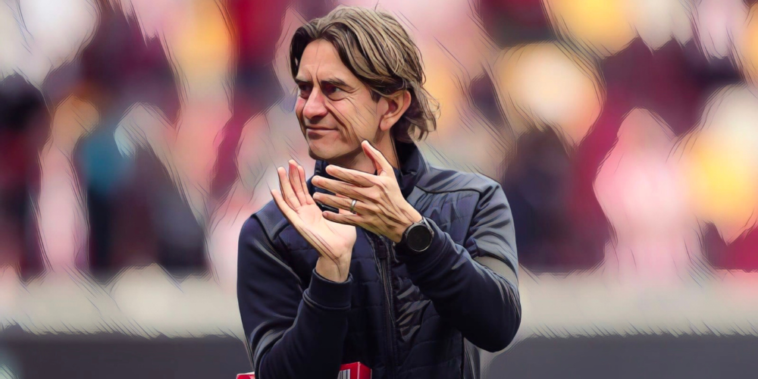 Brentford aren’t going anywhere yet Premier League fans. Despite many suggesting they would struggle in their sophomore season in England’s top flight, Brentford have been fantastic this season under Thomas Frank since their promotion and are now starting to add consistency to their moments of madness. A side that is proving a constant thorn in the side of all the big boys, the new Brentford Community Stadium is a force to be reckoned with and has become a fortress for the heavily Danish contingent. Their recent 3-1 win over Liverpool proves just that.

It was a defensive and strategic masterclass from Frank against Liverpool. They showed their character last season when the Reds came to town, fighting back to earn a tough draw against one of the Champions elect, and having started the return of Premier League football unbeaten on Boxing Day with a draw to Tottenham Hotspur and then a win away at West Ham United, Frank held his cards very close to his chest as Brentford steamrolled the Reds. What was more impressive is that they overcame the football betting odds without talisman Ivan Toney.

Liverpool had their own issues with squad depth and the Bees exploited that with an aerial bombardment of set pieces. Having taken the lead with a well-worked corner kick, the next two also found the back of the net but were chalked off by VAR. Moments later though, Yoane Wissa, deputising for the injured Toney, added his brace by timing his run perfectly.

The shellshocked Reds got their act together in the second half — Jurgen Klopp making a triumvirate of changes — and while it initially worked with Alex Oxlade-Chamberlain pulling a goal back, it left the side exposed for Bryan Mbeumo to pounce on an error and add a third.

“What a night! I can’t praise the players enough, they are incredible,” Frank said. “The attitude, effort, hard work and togetherness – everything they put together to beat a team like Liverpool.

On our longest unbeaten run in the top-flight since 1937

Having also beaten reigning champions Manchester City as well as thumping Manchester United 4-0, Brentford are imperious at home. When many believed that they would follow in the footsteps of Sheffield United and Leeds United in suffering second season syndrome after perhaps overachieving in their maiden campaign, the loss of Toney and Christian Eriksen has only fuelled the fire and will make Brentford a mainstay in the Premier League for years to come.

“It’s simply impressive that we beat Manchester City away, drew with Tottenham when we should have won, beat West Ham and now beaten Liverpool,” he added.

“We’ve been very consistent with what we’ve tried to do. Then it’s about the very important player discipline – they work very hard and want to go that extra yard for each other.

“It’s incredible to be in seventh. If you see the run of games we have been through, that’s very impressive.”

While it’s still unclear when Toney will return, Brentford have exciting attacking options and a dependable, close-knit squad that will do far more than just offer them Premier League safety this season. It wouldn’t be too ambitious to suggest this side could compete for European football in some capacity as a long-term target, especially if they keep winning at home.