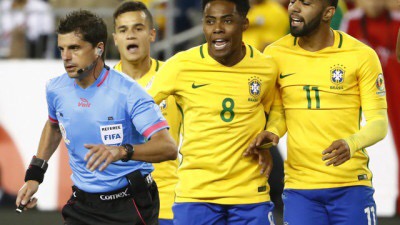 Brazil have been sensationally dumped out of the Copa America Centario after finishing in third place in group B.

The Selcao went into the game against Peru knowing they only needed a point to qualify for the knockout stages of the tournament as winners of Group B, however, despite having the  the majority of the ball, the five time World Champions slipped to a 1-0 defeat through controversial circumstances.

Peru’s Andy Polo crossed the ball in from the by-line, and it was bundled in by Raul Ruidaz, but replays suggest he used his arm to score. Ruidaz celebrated, Brazil protested, the referee deliberated, and after four minutes of discussions, awarded what would turn out to be the winning goal.

Brazil pushed forward for the equaliser, but when Elias squandered a golden chance from close range, their fate was sealed.

The defeat left Brazil analysing their worst Copa America performance since 1987, the last time they failed to get out of the group stage, whilst Peru, for whom a victory was the only result that would see them qualify, won the Group and advance to a quarter final fixture against Columbia.