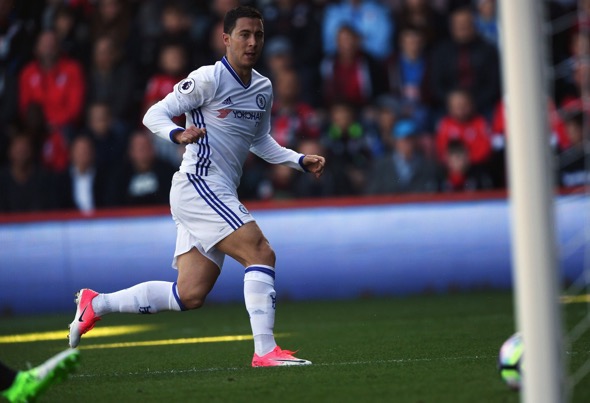 Eden Hazard continued his form, scoring another goal as Chelsea beat Bournemouth 3-1 on Saturday at the Vitality Stadium.

The Belgian had a good game once again, scoring then all important second goal to keep up the Blues title charge.

The Cherries kept the match close in the first half with their direct attacking. Joshua King scored his ninth goal in the last nine Premier League games from a hard shot that deflected off David Luiz and past Thibaut Courtois.

Chelsea maintain their seven-point lead over Tottenham with only seven matches left in the season. Bournemouth drop to 15th place, and were unable to match their longest undefeated streak of six Premier League matches.

The scoring was opened when Victor Moses crossed the ball after a diagonal pass from David Luiz. Diego Costa controlled the ball, turned, and sliced his shot off target with his weak foot. However, in a stroke of luck for the Blues, the shot deflected off Adam Smith and into the net to make it 1-0. Smith was credited with an own goal, so the out-of-form striker is still stuck at 49 Premier League goals, having gone goalless since March 6 when Chelsea played against West Ham United.

Real Madrid target and potential Player of the Year Eden Hazard then put Chelsea in total control. He connected with N’Golo Kante who had hit a long pass to the left wing. Hazard was on the shoulder of the Bournemouth backline and the perfect balance of speed and control, the Belgian winger skipped past Artur Boruc to roll the ball into the open net to make the score 2-0 for the Blues, enough to see the win through.

Marcos Alonso put the final nail in the coffin with a free kick that curled over the wall and past a flat-footed Boruc. By then, the Bournemouth attack had cooled off.

Victor Moses received a yellow card in the beginning after being slightly nudged by a defender, and slipping onto the heavily watered Vitality Stadium pitch. He touched the ball with his hand as he tried to recover from the fall. Kante and Pedro were also booked for Chelsea, while Harry Arter and Max-Alain Gradel were cautioned for Bournemouth.

Bournemouth are at White Hart Lane to play against Tottenham on Saturday, April 15, while Chelsea face Manchester United at Old Trafford on Sunday, April 16.

Victor Moses returned to the starting XI after missing two games due to a toe injury. The energy he brought to the right flank had been sorely missed as he barrelled into attacking space with his direct movement.

His positioning on the wing led to the first goal of the match, and he ran endlessly back and forth to both sides of the pitch today.

No pressure, no problem

David Luiz wasn’t heavily pressured as Bournemouth focused on staying compact and winning the ball in the midfield. This worked when Chelsea lost the ball in the middle a few times during the first half, and the Cherries pounced on the counterattack.

There is a way to beat this: have a passing center back skip over the midfield. Without pressure from Josh King and Benik Afobe, David Luiz had time to make long diagonal passes to the wingbacks who stayed up in attacking positions. The return of David Luiz to Chelsea in September has given the squad many options in building attacks. If one way wasn’t working, try asking the man with the best hair in the Premier League.

After the third Chelsea goal, the away fans who made the trek to Dorset sang for their club that are on their way to winning the league. “We Shall Not Be Moved” has been covered by the likes of Mavis Staples, Johnny Cash, and now the faithful Chelsea fans who were loud as ever on Saturday.

The Blues need a combination of 15 points from Chelsea wins and Tottenham losses and draws. Other clubs might try to have a say in the matter and play for the upset, but Chelsea are making a statement. They haven’t moved from the top of the table since Matchweek 12, and they’re looking to hold their ground. They shall not be moved.

When nobody is talking about a defender in the game they just played, they must’ve done a good job. Defenders are generally talked about if they made spectacular plays, or if they royally screwed up. When there is no mention, they silently did their job and allowed others to shine.

I didn’t even mention him in my original match report, but Cesar Azpilicueta was a stone wall in Chelsea’s backline today. While Moses pushed up into attacking zones, the Spanish defender was there to back him up. There were no catastrophes, and Azpilicueta played his heart out.

While Eden Hazard scored the wonderful winning goal, Cesar Azpilicueta is my MOTM.

On a side note, Diego Costa needs to score. Badly.